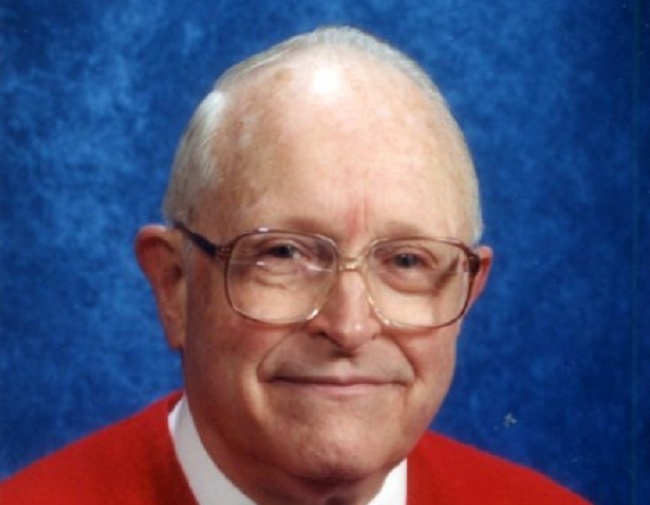 The first 17 years of his life were spent on his parents’ farm near Herndon, Iowa.

Jerry attended and graduated from Jamaica, Iowa, schools, where he participated in music, sports and other activities.

He was a member of the first Iowa All-State Band and received high ratings as a cornet soloist in Iowa High School Music Association and other talent contests.

Jerry organized and managed as baseball team of boys 14 years of age and under and coached the school’s junior high basketball teams during his final two years in high school.

He received Bachelor of Music Education and Master of Music Education degrees from Drake University in Des Moines. While there he served as president of the Drake Band and was a member of Phi Mu Alpha, national music; Alpha Tau Omega, social; Pi Kappa Lambda, honorary music; and Omicron Delta Kappa, honorary leadership, fraternities.

While attending college, Jerry maintained a private teaching studio in his home and directed summer band concerts in Yale, Dawson and Jamaica.

He was a member of the District Advisory Board of the IHSMA (two terms); and also served for two terms to Governor Robert D. Ray’s Commission of Youth. He was the recipient of IBA’s Karl King Active Award in 1992.

Jerry arranged, choreographed and directed the “Patriotism Pageant,” presented at the Girls State Basketball Tournament finals for several years. He originated a precision drill used by marching bands to turn parade corners now known as the “Texas Turn.” He was one of the first directors to utilize a girl’s auxiliary unit as an integral part of the marching band.

He was a co-founder of the Iowa Bandmasters Association Retired Director’s group (IBARD) and organized and directed the Sacred Heart Sax ‘n’ Brass Band of West Des Moines for 386 concerts and the Recycled Brass of Mingo.

At Blair Jerry founded an elite solo and ensemble contest called the “Band Olympics,” patterned after the World Olympics for athletes. The event has spread to other schools and states, involving hundreds of high school musicians annually.

He coined the title of the “Marchmasters” for Valley, West Des Moines, Marching Band, and began a consecutive string of IHSMA State Marching Contest Division I ratings that has lasted from 1961 to the present day for that school.

Jerry served as a judge for 54 years of IHSMA large group and solo and ensemble contests, as well as contests in Illinois, Minnesota and Missouri. He judged the Bill Riley Talent Search television show at the Iowa State Fair for 13 years.

He was preceded in death by his parents; and his first wife, Beverly.

In lieu of flowers, memorials may include the Iowa Bandmasters Association, the Mingo United Methodist Church, or the Jerry Kinney Endowment Fund at Sacred Heart School.