Since the start of the spring semester, the Woodward-Granger School Board has worked on framing a proactive position on bullying in the school district, including reviewing policies and procedures, forming an anti-bullying task force and inviting a noted anti-bullying expert to speak to students, staff, parents and the community.

Jodee Blanco, author of the bestselling “Please Stop Laughing at Me” and founder of the anti-bullying movement, brought her positive message of compassionate discipline to the WGCSD Wednesday, but the conversation about bullying in district schools began in earnest in December, when a parent with students in the district posted a comment about bullying on the Woodward-Granger Moms Facebook page.

Cassandra LaFleur of Perry said she was surprised by the overhelming response she received from other parents. She was “getting all kinds of PMs (private messages) from other parents,” she said, “so I knew it was an issue.”

LaFleur brought the conversation to the school board’s Jan. 21 meeting, when she “expressed her concerns and frustrations with the current policies and procedures in place,” according to the meeting minutes.

She described her January statement to the school board: “At the school board meeting, I said, ‘Is it going to take a child taking their own life because of bullying for the school board to open their eyes and realize what’s really going on within our own school district?’ A lot of parents were like, ‘Wow! Somebody spoke up,’ because it’s got to stop. I can’t sit back and watch this happen anymore. It shouldn’t happen at all.”

In response, the board formed the anti-bullying task force at the January meeting. The task force met Feb. 27 for a brain-storming session led by Curriculum Director Becky Durand, with four “goal areas” emerging from the exercise:

The task force will meet again April 1 at 6 p.m. on the second floor of the Woodward-Granger Elementary School in Granger. The community is invited to attend.

Blanco, the Chicago-based anti-bullying advocate, put in a full day in the school district Wednesday, giving three presentations to all 930 W-G students, a fourth presentation to the district’s 200 faculty and staff members and an evening session with about 40 children, parents and the community.

Much of her work takes place in school districts and diocesan schools, Blanco said, but she also addresses bullying in the workplace and hazing and university bullying. Her 2003 book made the New York Times bestseller list, and she is an in-demand keynote speaker at conferences and conventions.

Blanco outlined child-centered methods for responding to bullying so that the bully “learns self-awareness,” and the victim of bullying “learns to practice tolerance, forgiveness and compassion.” She also listed five things parents should never say to a bullied child:

The idea for bringing Blanco to the W-G community came from Woodward-Granger School Board member Jennifer Benbow, who said she was impressed by Blanco’s presentation Wednesday night.

“I have been a huge advocate for ‘stomping out bullying’ at WG,” Benbow said. “I truly hope that her story will open a lot of people’s eyes, especially our administration — as long as they actually listen and take her seriously. I have read both of her books, and she definitely has a great way of reaching students and people in general. I have spoken to her on the phone, and she is awesome! I’m very excited we had her in the district.”

The Iowa Code defines bullying and the Iowa Department of Education has issued guidance on the issue. “Bullying and harassment of students by other students, by school employees, and by volunteers who have direct contact with students will not be tolerated in the school or school district,” according to the 2018-2019 Woodward-Granger Community School District Parent/Student Handbook District Handbook. 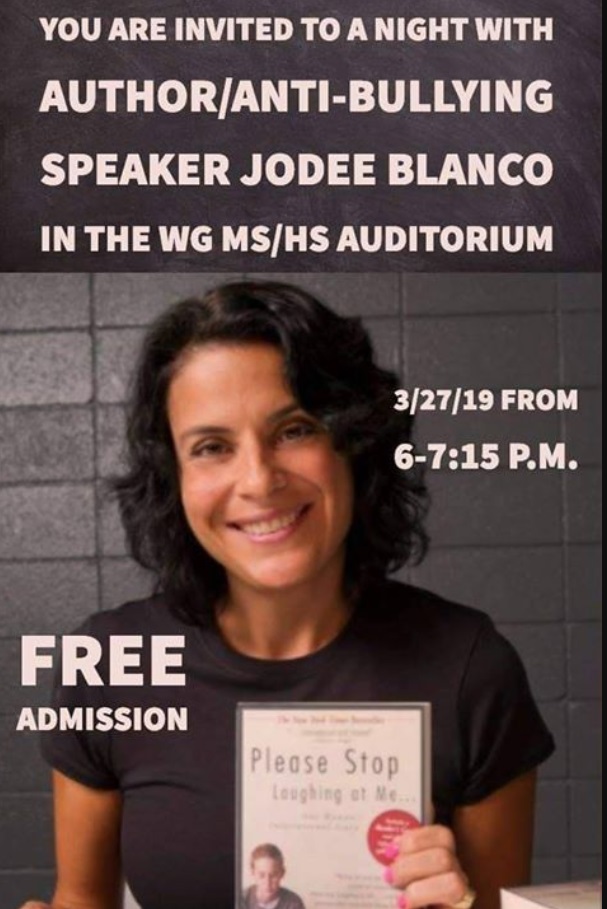