September 2019 marks the 60th anniversary of the historic visit of Soviet Premier Nikita Khrushchev to the Coon Rapids farm of Roswell and Elizabeth Garst in rural Guthrie County.

To mark the occasion, the Whiterock Conservancy will host a daylong “K60” celebration Saturday, Sept. 28, with a series of public events taking place on the lawn of the Roswell and Elizabeth Garst Historic Farmhouse.

The schedule of events for K60 celebration:

The keynote speaker for the K60 event will be CNN Presidential Historian Timothy Naftali, co-author of the award-winning book, “Khrushchev’s Cold War.” Naftali will review Khrushchev’s remarkable 1959 trip to the U.S. — the first for any Soviet premier — and he will discuss the significance of Khrushchev’s visit to the Garst farm.

As part of K60, the Whiterock Conservancy will also dedicate a replica of the 1957 sculpture, “Let Us Beat Swords into Ploughshares.” The work was created by artist Salavat Scherbakov and is based on the famous original by Yevgeny Vuchetich, situated at United Nations Headquarters in New York City.

Whiterock was gifted the sculpture by Valentina N. Fominykh and her son, Vladimir Fominykh, in 2018. The pedestal and installation were donated by Robert “Bob” Riley.

Recent renovations to the Garst Historic Farmhouse earned it the 2019 Best Rural Preservation Project from Preservation Iowa. Tours of the house and grounds will celebrate its history and the preservation work, and a Whiterock sustainable agricultural tour will also be offered.

Except for the agricultural tour, all the K60 activities will take place at the Historic Garst Farmhouse at 1390 Highway 141 in Coon Rapids, Iowa. 50058. The anniversary event is produced in partnership with Humanities Iowa and the National Endowment for the Humanities.

The friendship between the Garsts of Coon Rapids and the mercurial Khrushchev has become the stuff of Iowa legend. As Cold War tensions and fears of a nuclear confrontation escalated in the 1950s, the Iowa farmer, businessman and agricultural innovator Roswell Garst believed the best way to ease tensions between the two superpowers was by ensuring everyone had a full stomach — a true Iowa solution.

Garst fought passionately to bring agricultural advancements to Eastern Europe, traveling behind the Iron Curtain several times. On one of these trips, Garst met with USSR Premier Nikita Khrushchev, and the two men struck up a friendship. Garst invited the Soviet leader to visit him in America, and he also explained how the U.S. grew corn and fed cattle.

This meeting opened Khrushchev’s eyes to modern agricultural practices, and he declared he wanted the Soviet Union to have its own Iowa Corn Belt. Garst succeeded in sharing his technology with Khrushchev, including exporting hybrid seeds and tools to the USSR, and it ultimately led to Garst hosting the Soviet premier on his Guthrie County farm in 1959.

In announcing Khrushchev’s U.S. travel itinerary, U.S. President Dwight Eisenhower said “Khrushchev’s stopover in Iowa will be the only one in which he will directly come in contact with rural America.” Khrushchev’s motorcade passed through Perry on Iowa Highway 141 on its way to the Garsts’ home place.

The Cold War tensions of the time led to enormous publicity, and an estimated 25,000 spectators witnessed the historic Iowa visit. The event was closely guarded by state and local police, the National Guard and private security. Superpower tensions later increased significantly in the early 1960s with the placement of Soviet missiles in Cuba. U.S. relations with the Russians have had many up and downs since the days of Garst and Khrushchev.

For more information or to make reservations, contact the Whiterock Conservancy at 712-790-8221 or  guestinfo@whiterockconservancy.org. 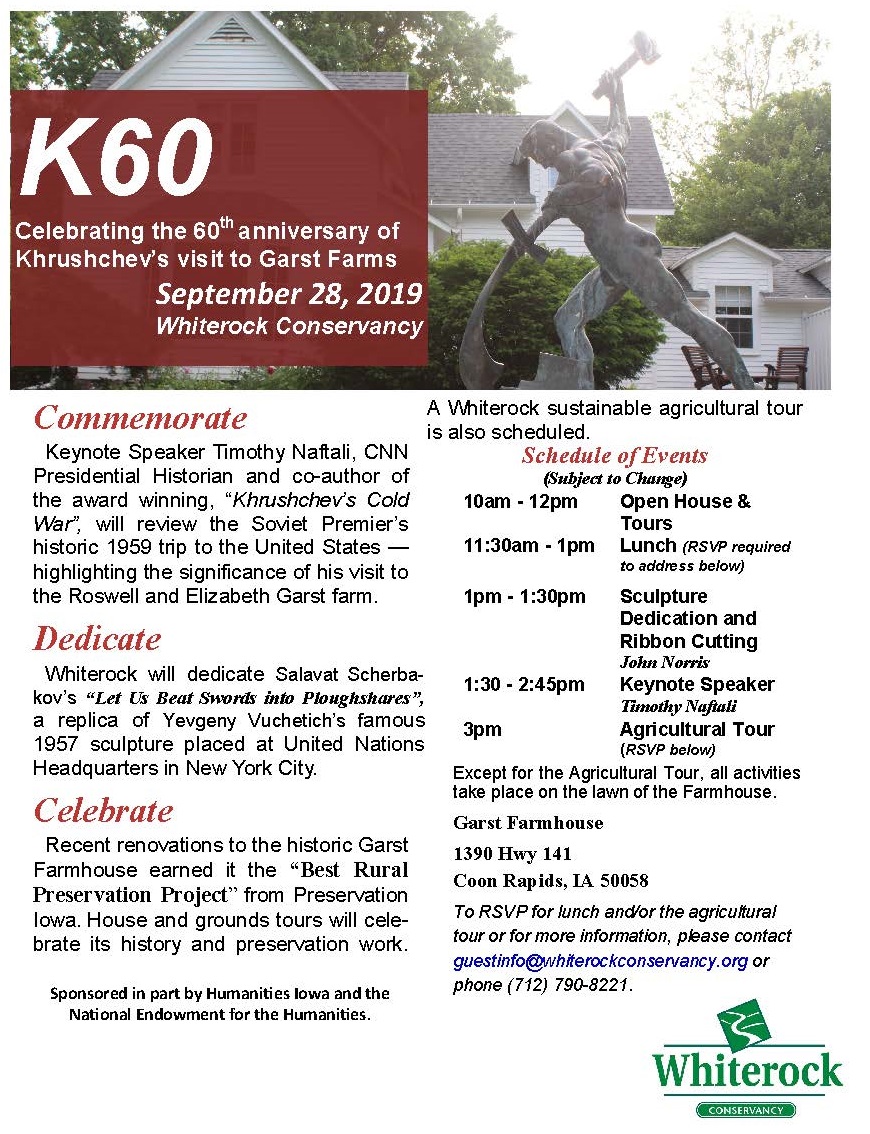