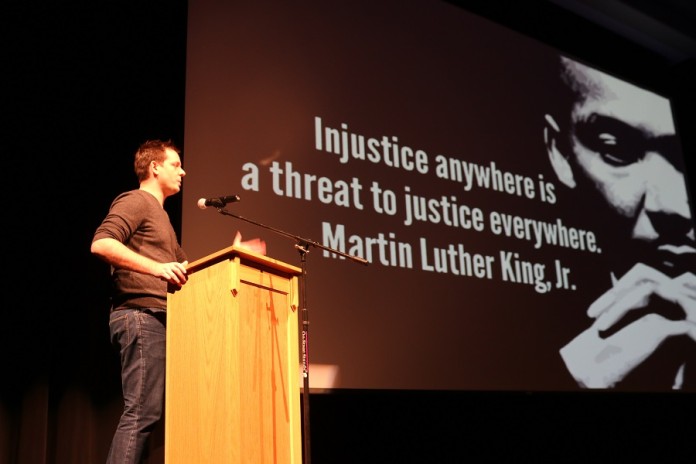 Perry native Keegan Kautzky, a 2000 Perry High School graduate and current director of national education programs at the World Food Prize Foundation, spoke for an hour Friday to PHS students about the moral duty of life and the obligation to care, to learn and to act.

Using two quotations from Dr. Martin Luther King Jr. — the U.S. civil rights leader would have turned 87 Friday if he had not been assassinated in April 1968 — Kautzky talked about identity, discrimination and the secret history of Iowa as a leader in civil and human rights.

Kautzky reminded his young listeners about King’s actions in the early 1960s during the height of racist violence in Birmingham, Ala. King was jailed as a protester and wrote his famous “Letter from a Birmingham Jail,” a seminal document in U.S. civil rights history.

“I truly love Perry,” Kautzky said, telling students about his own experiences growing up in Perry and attending PHS and Iowa State University, where he met the famed biologist and Iowa native Norman Borlaug, Nobel Peace Prize winner and father of the Green Revolution.

“This is the place that made me who I am,” he said of Perry. “But one of the things I struggled with when I was in your position was that I wanted to do good, but I didn’t know what that meant. I didn’t know where to start.”

At Perry High he was involved in the student council, in the local food pantry and in lots of different clubs, he said, but he was still uncertain about his purpose and direction. ISU brought new challenges in terms of majors, interests, skills — a career. What was his calling? He did not yet know.

That was when he met Borlaug, who pulled him aside and told him “the most powerful thing ever, the most amazing thing I’ve ever heard in my entire life. He said, ‘You cannot offer a solution to the world until you understand the problem.’ He said it’s great that you want to do good and have a lot of ideas, but before you offer the world those ideas, you have to get smart. You have to know what’s actually happening.”

Kautzky said he spent the next 10 years trying to learn “what’s actually happening” and to understand the real problems people face. He studied poverty by living among the poor in India and Malawi. He returned to the U.S. and moved to Washington, D.C., doing refugee work and advocating for child soldiers.

“I was taking every internship I could,” he said “and I was volunteering, and I was using my free time to read anything I could get my hands on. It was tough. I wasn’t making much money as an intern. A lot of the jobs were unpaid, but I knew I was learning a lot and would be able to do good work later, so for me it was an investment.”

Further work followed in South Africa and Mozambique and eventually his position with the World Food Prize Foundation. Reflecting on his own career path and its usefulness as life advice, Kautzky encouraged his listeners to follow their interests and consciences.

“You don’t have to know what you want to do right now,” he said. “All you have to know is you want to do something, and then start opening your eyes to opportunities. Start saying ‘Yes’ to every chance you get. Whether it’s a job or an internship or a travel opportunity or a class, say, ‘Yes.’ Learn everything you possibly can about that.”

Kautzky used the second quotation from Martin Luther King Jr. — “The time is always right to do what’s right” – to introduce the theme of diversity and discrimination.

King’s struggle for civil and political rights for African Americans was Kautzky’s example of the broader human-rights struggles still going on today. He discussed the many threads that make up the fabric of a personal identity and the ways these difference can form the basis of discrimination and lead to fear, hatred and even violence — in short, to injustice.

Kautzky illustrated his point with an activity. He asked the students in the audience to stand if they would answer, ‘Yes,’ to any one of nine questions.

Kautzky explained how expectations and assumptions influence how each person is treated. He said he was “blessed” by his own identity as a middle-class white male.

“By almost every standard, I am the definition of white privilege,” he said, but as a gay man has learned a lot about discrimination. While a notable victory for gay rights was attained in 2015 with the U.S. Supreme Court’s ruling on marriage equality, yet in 28 states a person can still be legally fired from a job simply for being gay, he said. In Nebraska, gay people are legally prohibited from adopting children.

“That is institutionalized, systematic discrimination, but that still exists,” Kautzky said.

He illustrated institutional discrimination with numerous other examples, starting with wage disparity by gender and race. Then he turned to “hate speech,” using as examples recent statements by Donald Trump about Mexicans and by Dr. Ben Carson about Muslims. Both men are candidates seeking the Republican nomination for U.S. president.

“Statements like this are made in Iowa in the year 2016 to millions of people, and it’s said as if this is okay, as if this is acceptable,” Kautzky said. “Everything about this is hateful and inappropriate, but that’s happening in our backyard right before the caucuses by someone who wants to be the leader of our country, who wants to represent every one of us.”

These “egregious personal forms” of hate speech are being made right here and now in Iowa, he said, but “people are not necessarily being held accountable for these statements.”

Turning from these disturbing and distasteful forms of ugliness, Kautzky then outlined Iowa’s remarkable history of civil and political rights, history most Iowans are ignorant of.

“We have a beautiful history in this state — to remember and to celebrate and to continue — and we ought to have that opportunity,” he said. “In all these ways for the last 200 years, we have been solving these problems. Leaders from America and around the world come from this place and attack these challenges. That’s who we are as Iowans. That’s our history. That’s our future.”