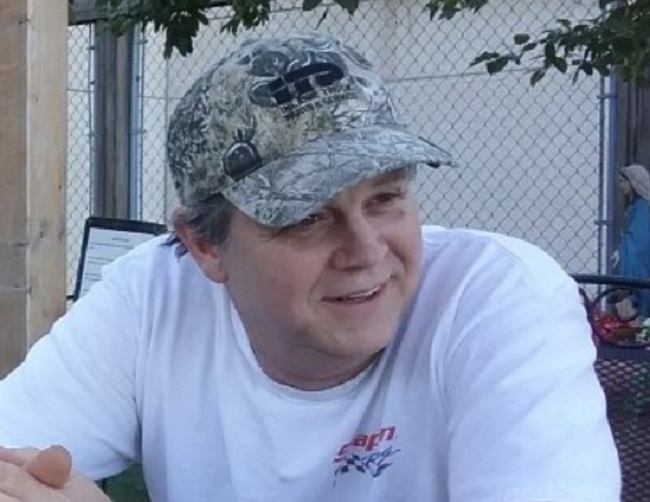 Kenneth Earl “Kenny” James, 55, passed away peacefully in his sleep with his family by his side the morning of Wednesday, Aug. 29, 2018, at Mercy Hospice in Johnston after a hard-fought battle with cancer.

He will forever be bonded with his youngest grandson, who turned 1 on the day of Ken’s death.

He attended Dallas Center-Grimes Schools and moved to Arizona with the love of his life, Venea Spencer. They moved back to Iowa in 1989, a year after their daughter, Heather, was born.

Ken was a mechanic for all of his working life. Customers even followed him as he progressed in his career. He started working at his step-father Carl Laughman’s DX gas station in Dallas Center pumping gas after school.

Ken lived in Dallas Center most of his life, always seeming to gravitate back.

Even when away from the shop, Ken was always willing to help, whether diagnosing a car over the phone or inspecting a car for a friend before they bought it.

He was very proud of the fact that he had taught his daughter the basics of taking care of her car.

Ken also participated in holding workshops for the local 4-H Club and teaching club members how to care for their cars.

Ken enjoyed racing, camping, fishing, hiking, RC racing and shooting, and he was a member of the Jack Daniel’s Tennessee Squires.

He loved watching his grandchildren learn and grow while building memories together.

He was preceded in death by his parents; and brothers, Doug James and Daniel James.

Memorial Services will be held at 5 p.m. Friday, Sept. 7 at Iles-Brandt Chapel in Dallas Center, where friends and family are encouraged to bring their best or classic car. A Celebration of Life (Whiskey Friday) at 6 p.m. at Deaton Truck and Auto Inc. at 2521 240th St. in Dallas Center, where friends and family will share a meal and stories. An informal graveside service will be held at 10 a.m. Saturday, Sept. 8 at the Brethren Cemetery east of Dallas Center.