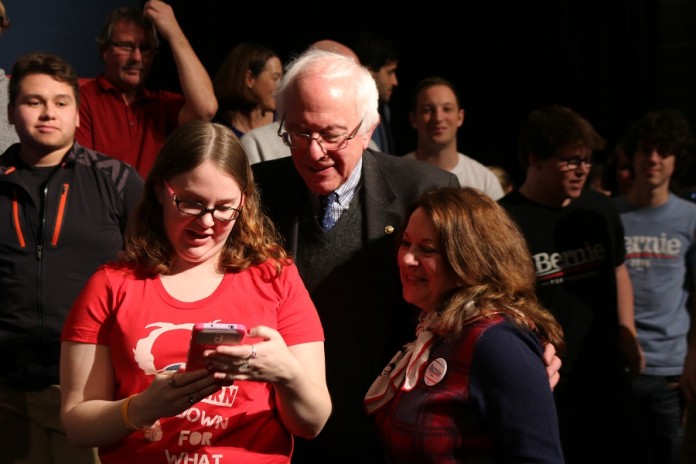 We live today in a complex, technological world filled with many dangers and opportunities. Our responsibility for choosing our democratic destiny by attending the Iowa Caucuses behooves us to reject ideas that might have been relevant 50 or 200 years ago, ideas that divide us or distractions cooked up by the lame-stream corporate media and the wealthiest 1 percent who want to game the system even more.

I intend to support somebody who has reliably stood with the rest of us, the 99 percent, to create a better world for our children and grandchildren. I intend to support somebody who is trustworthy and who trusts us to participate in government deliberations rather than spout partisan formulas in order to rake in perks and corporate campaign donations.

The person I’ll be supporting at my local caucus is Bernie Sanders, the straight-shooting U.S. Senator from the rural state of Vermont. I’ve visited farmers and small business folks in Vermont and found that Vermont is a state where the people value their family farmers and rural communities and value their town-hall democratic traditions.

Trust will be the issue in the general election — and unifying leadership. Bernie Sanders will not only be honest with the American people, he’ll expect us to be involved with our brains in gear where everybody’s ideas count.

Bernie has always run for office as an independent, and the people of Vermont have recognized his integrity and dedication to democratic process. Besides being elected mayor of Vermont’s capital, Burlington, in four consecutive elections, he was the state’s U.S. representative for 16 years. He won the race for U.S. Senate in 2006 with 65.4 percent of the vote and was re-elected in 2012 with 71 percent of the vote!

No matter whether you’re an independent, Republican or Democrat, you have the opportunity to help restore sanity to our political deliberations by casting your vote at your local Democratic Party caucus Feb. 1 for Sen. Bernie Sanders. That’s what I’ll be doing.

Letter to the editor: Equal justice at issue in Marsy’s Law

Letter to the editor: Sub blindsided by IWD backlog

Letter to the editor: Dangerous guests for Dallas County GOP

Letter to the editor: Lawmakers should rescind anti-mask law