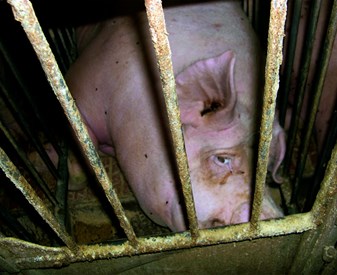 New Jersey Gov. Chris Christie was at the Clinton County GOP hog roast in July. During the meet and greet, he referred to his reliance on Iowa Gov. Terry Branstad for advice regarding agricultural issues and said if he were elected president, he would desire to rely on similar people for advice.

That’s too bad. Branstad has repeatedly failed the residents of Iowa in preference for corporations, many which are not in Iowa, and some not even in the United States.

Christie characterized his veto of legislation to ban gestation crates as evidence of his ability to listen to “experts” and do what is right for corporate ag interests. He and Branstad are cut from the same cloth when it comes to ignoring the citizens of their states and the legislators elected to represent them.

The gestation crate ban had bipartisan support — super-majority support — in the state of New Jersey, but Chrstie ignored them. Similarly, Iowa’s legislature passed funding for additional conservation practices, and Iowa’s citizens approved an amendment to fund conservation practices, but Branstad vetoed the legislation and stands in the way of enacting the amendment.

Christie’s comments denouncing the Environmental Protection Agency (EPA) are alarming to those of us involved in and concerned about environmental protections. Without the EPA, it would be a race to the bottom. Corporate ag interests are about short-term profit at all cost.

Iowa and the United States deserve better. We sure need better.