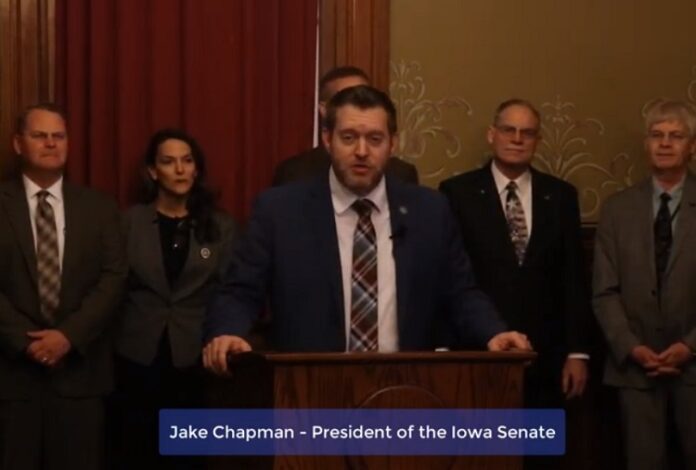 A couple of weeks ago, I told you that I was anxiously and eagerly working on legislation to protect Iowans from big tech censorship. Wait no longer. The legislation is here!

On Thursday I held a press conference with a number of my fellow Republican Senate colleagues to announce that we have filed SF402 to protect Iowans from liberal executives in the Silicon Valley who are censoring your speech! Proudly, we have a total of 30 senators sponsoring this incredibly important piece of legislation.

Our nation was built on the ability of Americans to freely express their views, political or otherwise! Yet today the public square of the 21st century is being controlled by a small number of elitists who believe they are the arbiters of truth and are dictating what content you can see and hear.

Iowa is in a unique position in that these big tech companies have or will invest billions of dollars in constructing data centers in our state. From Altoona to Council Bluffs to Waukee, big tech is here in a very huge way. These tech companies have or will reap hundreds of millions of dollars in tax incentives, including property tax abatements, tax credits and even exemption from paying tax on their energy consumption.

Unfortunately, under U.S. Code Section 230, big tech has been shielded from civil liability for their feckless censorship. This law preempts states from enacting measures that will allow our citizens in Iowa to file civil liability suits against these companies.

To further protect Iowans despite this unfortunate limitation, they will now have the ability to take action. With SF402 we will make big tech pay for their censorship.

SF402 establishes a mechanism whereby Iowa citizens will have their complaints investigated and heard before a court of law. Upon a finding that constitutionally protected speech was likely violated, the big tech companies will forfeit hundreds upon hundreds of millions of dollars in tax breaks, incentives and credits.

I feel so passionate about this legislation that I will personally shepherd this bill through the Senate. SF402 will receive a subcommittee very soon, and a companion bill has been filed in the house as a study bill in the Judiciary Committee by Chairman Steve Holt.

Big tech will be forced to choose: Either respect Iowans’ rights to express their views and thoughts, or forego these rich tax breaks. I have already begun the process in reaching out to colleagues in other states to introduce similar legislation. I am optimistic this type of legislation will be introduced in numerous states!