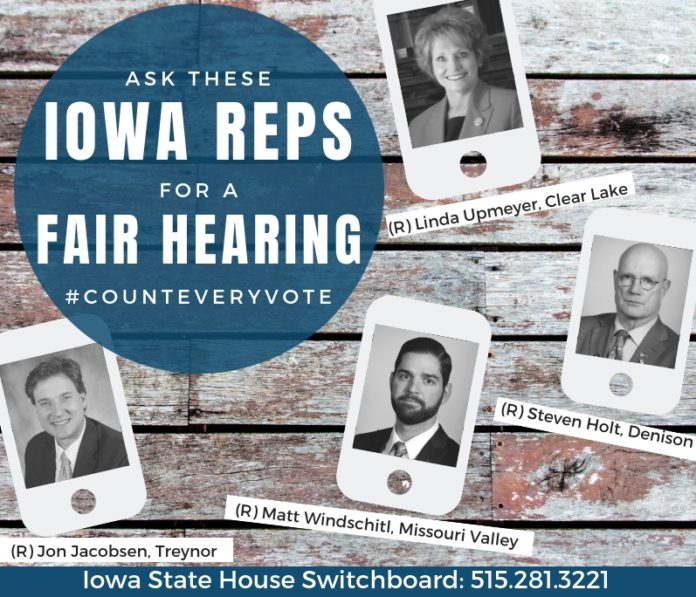 One year ago, I was in the midst of announcing my intention to be a candidate for the Iowa House of Representatives. It was an exciting time. I was daunted by what would be required and hopeful for the opportunity to represent Boone and Greene Counties at the Iowa Capitol.

We campaigned hard and ran a race we could be proud of but after 10 months of hard work, we lost. Every ballot that was cast in our local election was counted.

In Greene County, there was a very close race for county treasurer. The election-night results for a good friend, who had started her service at the time my grandfather was County Supervisor over 30 years ago, were not the results she was hoping for. After a recount, the final results showed her losing by a margin of two votes.

It was a disappointing loss, for sure, but in both of our losses the winning candidates had obviously won by earning more votes from the voters. There was disappointment but not any doubt about the will of the voters.

As a candidate for the Iowa House, I watched other individual Iowa House campaigns closely. One of the races that I followed was the race for the seat in House District 55. Kayla Koether was also a first-time candidate, and I learned from our one meeting that she was a farmer like myself and that we had Grinnell College in common as well. She had been a Grinnell College student, and I had spent three years there as a college librarian.

What we also have in common is that Kayla lost her Iowa House race — by the closest of margins, 9 votes — but unfortunately, as I understand it, not all of the ballots cast by voters in her district were counted.

Kayla has been fighting to have 29 ballots counted that were cast as absentee ballots in the mail but, due to poor legislation and lack of accountability at the county and state levels of government, 29 Iowans’ right to vote is being denied. (Her winning opponent, as I understand it, has not weighed in on whether these ballots should be counted or not.)

In what looks like the final opportunity for the government of Iowa to make this right, a committee of three Republicans and two Democrats has been handed the task of looking into and certifying the results of the election for a seat to the Iowa House.

Unfortunately for Iowans, as this committee is being designed, it is not clear whether evidence will be allowed to be shared with the committee regarding the circumstances of the denial of voting rights for 29 voters in Iowa House District 55, centered around Decorah in northeast Iowa.

The three Republican committee members are all located in “safe” Republican districts in western Iowa. I fear that this will be another instance in which the playing field is already tilted against regular Iowans’ and their ability to have their voices heard.

I would urge legislators to reflect on some of the strong voices that we lost in 2018, servicemen who served their country and were independent voices for Iowans and Americans, gentlemen like John McCain and John Culver, who served their nation in uniform, as well as the U.S. Senate.

Consider the former Iowa Gov. Bob Ray, who campaigned like a Republican and governed as an Iowan. There was a time when elected officials put the voices of Iowans ahead of their own ambitions and served the people before they served their party.

I encourage each legislator on this committee to be empathetic not only to the candidates in this Iowa House race but most importantly to the voters who took the time to request and fill out on time their absentee ballots.

One of Kim Reynolds’s guests at her State of the State address was a representative from Midland Power Cooperative (I am a member). The January newsletter describes the importance of being a member in a co-op: “In a democracy, member participation is crucial. That’s why it is important for you to vote in co-op elections, attend various member events and meetings and let us know when issues arise that need our attention.”

We should hold our state government to no lower a bar than our rural electric co-ops.

Letter to the editor: Libertarianism is organized hatred