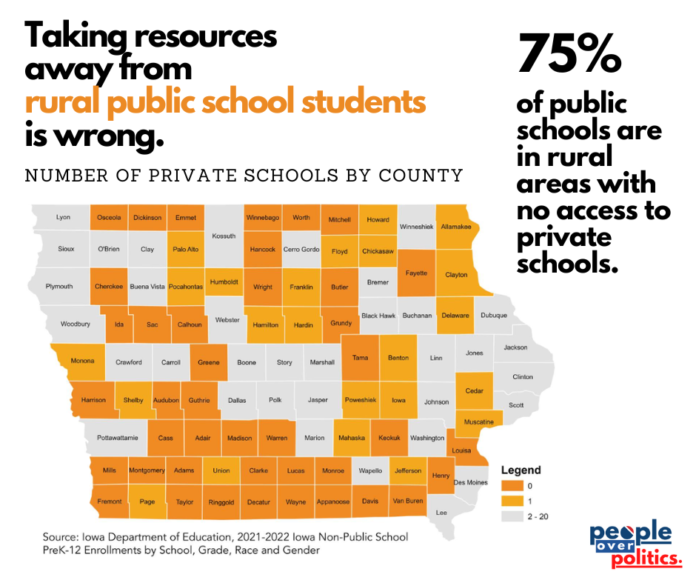 While the Iowa Legislature has been in session for just over a week, lawmakers were told today that the governor’s voucher bill will be debated on Monday, Jan. 23.

I’ve heard from many Iowans who are frustrated that a bill so controversial is being fast tracked through the Iowa Legislature so early in session. I don’t blame them one bit. It’s all politics, and I’m frustrated, too.

For me, this voucher debate has to be centered on kids and what’s best for every kid, not just a few.

I think of kids like my godson, Ezra. He is a sweet, bright boy who loves big and works hard. During his time in public schools, he’s been successful at navigating his learning differences with great teachers, partners, resources . . . and plenty of hard work.

Today, private schools have no requirement to accept kids like Ezra, and most don’t. The governor’s voucher bill doesn’t do anything to fix that problem, and it actually puts kids like Ezra at a disadvantage. That’s because it shifts money out of public schools and gives it to private schools instead.

While millionaires would be able to send their kids to private school using our tax dollars, kids like Ezra would be left behind in public schools with fewer resources and bigger class sizes. I think every kid deserves an equal shot at a great education that meets their needs — and only public school can provide that for each and every kid.

At a special public hearing on vouchers earlier this week, Iowans gave us many reasons for their opposition to vouchers, but most were centered on similar concerns that the plan is fundamentally unfair to too many Iowa kids.

Overall, the message they gave state lawmakers was pretty clear: they are strongly opposed to the governor’s voucher bill. Over 1,600 Iowans participated in the hearing, and 73% of them were opposed to vouchers.

Many voiced concern about the kids who live in one of the 75% of public school districts without any access to a private school. The governor’s voucher bill doesn’t give them any choice at all.

Several parents talked about their child who lives with a disability or may need additional support for their education, just like Ezra does. Under the governor’s bill, private schools can still reject their application because they don’t want to pay for the extra assistance that kid needs.

Lawmakers also heard a lot of frustration about a new provision in the voucher bill this year that removes income restrictions and opens it up to kids already at private schools today. The change means the wealthiest families in Iowa would get another $100,000 of public tax dollars that should be going to public schools instead.

Right now, it’s clear the governor wants her voucher bill, and she wants it done yesterday. However, our job as lawmakers is to scrutinize every piece of legislation closely and make sure we consider the consequences — and unintended consequences — before sending bills to the governor’s desk.

Lawmakers can certainly do better than 10 legislative days to discuss legislation that will eventually commit well over $1 billion of our tax dollars to private schools that don’t even have to serve every kid.

A lot of Iowans have asked me why this bill is being pushed through so fast this year. While I had hunches, it became pretty clear after our public hearing this week — Iowans in rural and urban areas of all parties don’t want vouchers. The more Iowans learn about the voucher bill, the stronger the opposition gets.

While debate is set for Monday, no one knows right now if the bill has enough votes to pass the Iowa House. There are lawmakers on both sides of the aisle in strong opposition to this bill.

Iowans need to know that it isn’t too late to take action and stop the voucher bill. There are just three days left. Contact your lawmaker here.

Every time a state lawmaker gets an email, call or direct message on social media from an Iowan opposed to vouchers, it increases the chance that the voucher bill dies in the House again this year.