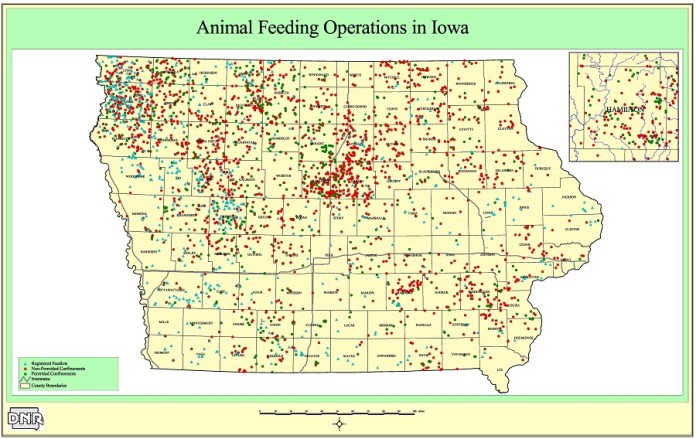 Proponents and opponents of factory farms eagerly anticipated the outcome. Prior to the trial, Richard Warren and Warren Family Pork filed a “Confessed Judgment” and entered into an out-of-court Confidential Settlement Agreement with the plaintiffs. Many CAFO opponents consider this an important victory in and of itself. Unfortunately, despite vigorous arguments by plaintiff’s legal counsel, the jury decided for Cargill/JBS, the remaining defendant.

Nonetheless, the issue of CAFOs being held accountable to neighbors is just beginning. This trial was the first of many CAFO lawsuits around the state in litigation with the Speer, Middleton and Sykes legal team. CAFO nuisance cases pose a significant commitment of time, money, public scrutiny and uncertainty for CAFO owners. It’s believed the Warren family and Cargill/JBS incurred monumental legal fees well into six figures over the two- to three-year litigation period.

Eldon McAfee, longtime attorney for the Iowa Pork Producer Association, knows all too well the cost and stress of nuisance lawsuits for CAFO owners. He addressed the issue — as he does every year — at the January 2016 Iowa Pork Congress as part of his annual legal overview of CAFO nuisance cases with recommendations to CAFO owners.

At the 2014 Pork Congress, McAfee spent only a few minutes reviewing nuisance lawsuits, noting there hadn’t been any cases since 2008. This year, however, he dedicated a full one-third of his presentation to 12 current cases, that he said are raising serious concerns to the industry.

McAfee reflected on the sharp rise in the number of CAFO nuisance cases now in litigation. In his 20 years of experience, he said, “Right now we have as many nuisance cases on file in Iowa . . . that I know of at any one time.”

The lawsuits bring costs and stresses to the owners of the factory hog confinements. “I can guarantee you,” McAfee said, “that every producer on that list of 12 sincerely wishes they weren’t on that list.”

On aspects of the Cargill trial, he said whenever a CAFO owner’s lawyer says that something about a suit is “unique” or “interesting,” then you better “hang on to your wallet because that means it’s going to take a lot of time and a lot of legal work.”

On following Mr. McAfee’s recommendations to avoid lawsuits: “I’ll be the first to tell you, you can do every one of these things . . . and still get sued. There is no magic bullet.”

In the opinion of Jefferson County Farmers and Neighbors Inc., these lawsuits aren’t going away. There will be wins and losses, but anytime a CAFO nuisance case goes to court, it serves as a significant deterrent, and the pork industry groans – or rather, squeals.

Anyone considering a CAFO should think long and hard about the ramifications of building a confinement against their neighbors’ wishes.