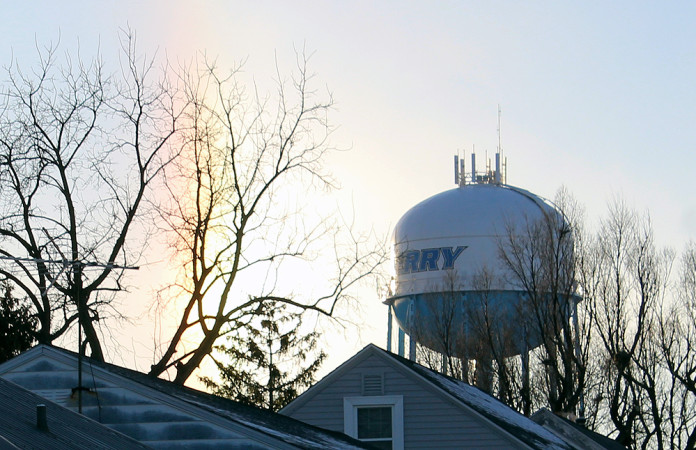 President John F. Kennedy’s call for service has long been one of the most motivating messages in my life. In his inaugural address, he mentioned that the progress would not be finished in the short term but that it was important to begin now.

If President Kennedy were still alive today, he would have been proud of a mighty group of Perry leaders Wednesday, Dec. 17, when the Iowa Rural Development Council and Empower Rural Iowa task forces held a joint meeting at one of Perry’s landmarks, La Poste, where they were tasked with presenting recommendations to the governor on rural development initiatives.

About 80 economic development professionals from around the state, including the governor and lieutenant governor, were in attendance for the daylong meeting. They were welcomed with thoughtful gifts, serenaded by the Perry High School Select Choir and led on tours around the downtown area.

As the host community, Perry was allotted time to showcase the community in between meeting sessions and during and after lunch. Those present heard from Jenny Eklund and learned the great story of how a small group of determined women bought a dilapidated building for $1 and went on to pour their money, sweat and tears into creating a masterpiece that hosts hundreds of events a year and brings in economic activity to Perry every week. The passion that these ladies showed to turn their dream into a reality captivated the audience and highlighted Perry’s grit.

City Administrator Sven Peterson highlighted the many innovative things our community has done to make Perry a great place to live: the initiative that led to the construction of 25 new homes in 2019, the additions to the local airport, the investment in the industrial park that attracted new businesses to Perry, the revitalization of downtown Perry, the opening of many new businesses around town and the upcoming expansion of some of the major employers in Perry were but a few of the highlights that could be shared in the limited time.

That was not all, though, as we had 90 minutes after lunch not just to talk about Perry but to show it, and that we did! A walking tour of downtown Perry was orchestrated ahead of time, with some of Perry’s biggest advocates gathered to serve as tour guides and presenters to the special guests.

From former police chiefs to educators and local business people, each one of the guides took the groups around downtown, pointing out different things along the way. Each group stopped at the Josh Davis Plaza and Soumas Court, DMACC VanKirk Career Academy, Hotel Pattee and one of the Nudgers’ apartments above the Perry Chief building. While 15 minutes was not nearly enough at each location, a brief presentation at each stop allowed attendees to learn more about Perry’s progress in education, housing, commerce and art.

The day concluded with Gov. Reynolds receiving the task forces’ recommendations at La Poste and a group picture for posterity. Soon after came the accolades for Perry from the visitors. It started with glowing comments from the governor, e-mails, tweets and Facebook shares from attendees —  all positive messages of being impressed and inspired.

Perry is doing some great things, and rural America has a lot to be hopeful about. Lt. Gov. Adam Gregg mentioned that the Iowa Rural Development Council has a lot to learn from Perry and its people. The president of a prominent statewide development group summed it up best when he said, “In many years of economic development work, I can’t remember many as inspiring as yesterday. Everything that Perry did to host us was highly informative and motivating.”

I ended the day motivated and proud of all the people who have poured their energy into keeping Perry moving forward. They don’t do it for the recognition, but I do wish more people had the opportunity to take a guided tour like our visitors did, to learn of all the work that these Blue Jays have done. They exemplify JFK’s message of service to our community, our nation and the world.

In conclusion, I challenge the reader to two things:

1) Join the movement! There are many opportunities to be the change you want to see in the world. Organizations like the Nudgers, Rotary, Optimist, Kiwanis, Elks Lodge, Hispanics United for Perry, Perry Chamber of Commerce and Perry Economic Development are all hungry for motivated members who want to keep the momentum going. Coach youth sports, join the Booster Club, volunteer at your church or do anything else you can think of because the opportunities are endless.

2) Say thanks! I challenge all of us to thank those people who have put in the work to help Perry. They take time away from their families, work and free time for the sake of others.

I’ll end by thanking the group of individuals that organized the day’s event, even though they deserve a much larger thank you for all that they do on a regular basis to help grow Perry. Deb Lucht, Lynsi Pasutti, Jenny Eklund, Matt McDevitt, Tom Burkgren, Sven Peterson and Mike Fastenau spent many hours preparing for this event to showcase Perry and ensure that the guests were treated with Perry hospitality.

Others chipped in along the way with both their time and treasure to make the day a success. Clark Wicks, Tom Maxwell, Hawn Wong, Matt McDevitt, Pat Snyder, Sandy Grubbs, Jenny Eklund and Lin Jacobsen were among the presenters, and Dan Spellman, Dean Berkland, Butch Niebuhr, Dan Brickner, Tom Burkgren, Mike Fastenau, Cheri Scheib and Lynsi Pasutti were the tour guides.

Perry’s progress is not done, but we are closer now than we have been in the past, and it is worth noting!

Letter to the editor: Convict Trump, ‘a danger to our country’