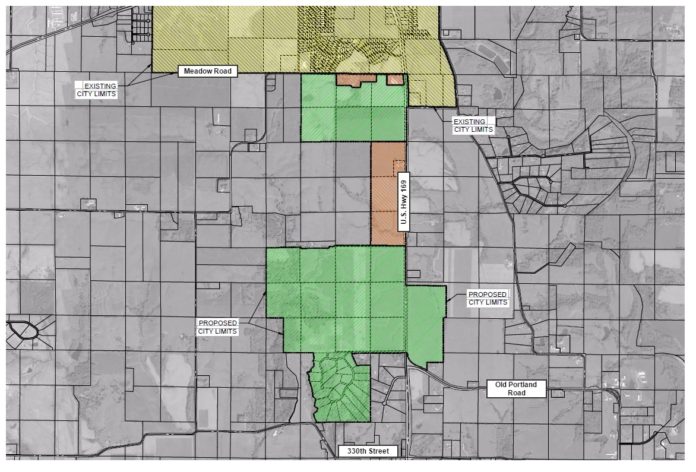 This was written as an open letter to the Adel Mayor and City Council.

I’d like to address the proposed annexation specifically, but it’s hard to do that without beginning by touching on the overall approach to growth currently occurring in our community.

First I’d like to state that I’m not entirely against the idea of abatement. (Full disclosure: My home is currently a tax-abated house.) I think abatement is a valid tool for cities to use to encourage growth in order to improve finances, and I have no doubt that the homes that have been added to our community will do just that when they come onto the tax rolls.

As I have watched the rate of growth increase, I have grown very concerned about the direction this council is taking our community. Actually, it’s not been so much of a growing concern for me as it has been a shock to the system, delivered by the sight of the massive clear-cutting project occurring on the southern edge of town.

Now growth can be good, but this current apparent embrace of an all-growth-is-good-growth approach is bad: bad for the schools, bad for the town, bad for the community. Those who want to live in a community like that, frankly, can pack up and find ample opportunities just a short drive to the east.

That is not why we live in Adel. We live in Adel because we want and expect something different. And to those on the council who have lived long in this community and continue to pursue this uninhibited growth, it is stunning that you fail to understand that.

To those on the council embracing this pattern of growth, it might do you well to communicate and explain to the community your reasons why. Why do you feel this is good for our town? What is the benefit? What is your vision? In the absence of this, the rest of us are left to reach our own conclusions based on the information available to us.

And in regards to this proposed annexation, that information begins with a map. A map that raises a number of questions. Why does it go halfway to DeSoto? I’m not necessarily against the idea of annexation. For example, I felt it made perfect sense to annex eastward in past years in order to block off Waukee. But is DeSoto threatening to encroach on our territory? If so, you should certainly share that information.

If the city is going to annex that far south, why stop there? Why stop immediately short of a development with about a dozen higher-end homes? The boundaries are odd and confusing. That is, until you notice a couple of the signatures on the voluntary annexation documents included in the public hearing packet and then follow up with a look at county assessor records. Then things start to become clear.

Looking at those records, you find a handful of owners, but two names that stand out: William Spencer and Jamie Myers.

Why are these names notable? Why did they catch my attention? To start, both were former top executives at the once giant but now defunct Regency Homes.

Now the fact that these two gentlemen are still working in real estate, by itself, is of course not an issue. What makes it troubling is that Spencer is the same man who currently chairs Adel’s Economic Development Commission, a commission that two Adel City Council members who have consistently voted pro-growth also sit on.

Setting aside for now the question of why on earth Adel’s Economic Development Commission is being led by a former real estate executive involved in one of the biggest corporate and real estate failures in Iowa history, the conflict of interest here on this proposed annexation is not just troubling. It is shocking.

To be clear, the same man leading Adel’s Economic Development Commission, influencing development decisions for the city, including this proposed annexation, stands to be its biggest beneficiary.

Spencer has a stake in more than one-third of the land included in the proposed annexation (367 of the total 1,012.03 acres). And not just any acres, these acres are in the southwestern corner of the proposed territory, off of the highway. the most disconnected to the current boundaries. The reason for the map and its odd boundaries becomes clear.

This raises many ethical questions and concerns, both of Spencer and of the city for allowing this situation to occur.

While I’m not certain the legality of this situation, I am certain it does not pass any sort of smell test. It reeks of impropriety and unethical behavior. And anyone who votes in favor of this annexation is certain to be covered in that stench.

Council member Mike Haynes and Council member Bob Ockerman, I thank you for your continued dedication in trying to stop this situation from occurring.

Council member Shirley McAdon and Mayor Jim Peters, I have always admired and respected your dedication to this town and our community. That makes it all the more shocking that this situation is occurring on your watch.