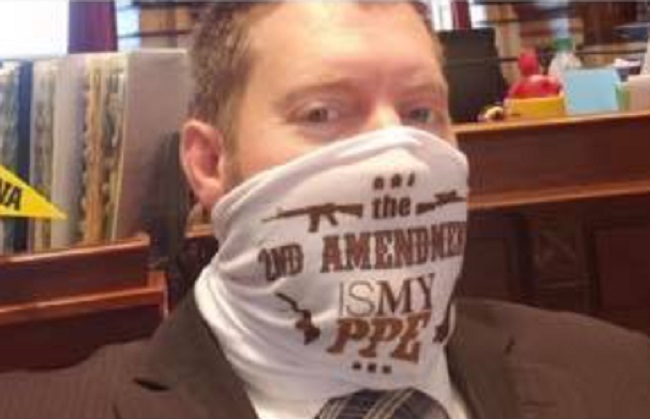 I am writing in reaction to “Jake Chapman stokes vigilante zeal in some Iowa gun owners.”

“Wake up, America!” said Iowa Sen. Jake Chapman to his Iowa Senate district 10 base. “Now is not the time to sit silently on the sidelines!”

I agree, Senator! I call upon all voting-eligible citizens of district 10 to vote for Warren Varley in November!

Senator, America’s disintegration is not evidenced by protests, the blocking of streets or entrances to businesses or even by vandalism of statues of men who fought against the United States of America—traitors to their country literally put on pedestals.

The disintegration of America is evidenced each time we move further away from being a democracy. After a record-breaking primary turnout, your party’s solution was to block democracy by handcuffing the Iowa Secretary of State — a Republican — in order to prevent another successful election turnout. Is voting so communist?

Suppressing the votes of eligible citizens of a democracy is the exact opposite of democracy, Senator. But blocking a Hy-Vee entrance requires mobilization of the Iowa National Guard. Are you as outraged by the destruction of human life — of Freddie Gray, Philando Castile, Tamir Rice, Michael Brown, Eric Garner, Breonna Taylor and many others killed — as you are by a blip in a retail experience?

Yes, we are all pro “law and order.” I want people to stop for red lights, to not drive drunk, to not put arsenic or too much rat poop in my water or food, to not rape, pillage and murder. Does your tough “law and order” stance include being tough on those who “protect and serve” when someone dies in their custody, is shot when they have no weapon, is shot in the back, is shot when their hands are in the air or when they’re in their own homes? I want the same “law and order” across the board — no favorites.

And if shock and awe is not brought down upon protesters with whom you disagree, then you want to “withhold state funds for providing the service to these cities who refuse to enforce our laws . . . enough is enough!”

You do seem to be supporting only half this equation, defunding the uncooperative cities and withholding the money until they bend to your narrow worldview.

You stated, “We will restore law and order! These criminals must face justice! The First Amendment is not a license to loot, destroy property, intimidate others, block roadways or shut down businesses. Elected officials not willing to enforce our laws must also be held accountable!”

I agree. But, alas, I fear our perspectives are quite different and we’re not talking about the same “criminals.” Yes, we should restore law and order. All Americans should face the same justice system. Bryan Stevenson, founder and executive director of the Equal Justice Initiative, a human rights organization in Montgomery, Alabama, says we have a criminal justice system that “treats you better if you’re rich and guilty than if you’re poor and innocent.”

All criminals must face justice, not just a select group. And a badge should not make you immune from actions that would result in criminal charges for anyone else. The badge is not a license to destroy lives, families and communities.

“Protests do not include vandalism, looting or harming others,” you say. I guess no harm was done when peaceful protesters in D.C. were tear-gassed so President Trump could have a photo op. Killing someone for a bad check, a minor traffic violation, selling cigarettes, sleeping in her own home–clearly isn’t “harming others.”

By all means, please rant on about these criminal protests, and then “like” a suggestion by a follower for “armed civilians to take action” or a threat that “If the people we pay to enforce our laws don’t start enforcing them, then we will.” The protesters are criminal, but your armed supporters against them get a “like”?

But you’re “pro-protest” if they are “lawful protests done in the right way, in the right place, at the right time.” As long as protesters schedule it with you in advance and you approve of their agenda, then you’re not anti-protest at all. All hail, American freedom!

Aren’t protesters the most patriotic, U.S.A.-loving among us? They love the U.S.A. enough to point out her flaws and work hard to help her become better for all Americans—to help her meet the true ideals of life, liberty and justice for all–the shining vision of our founding fathers that we have not yet achieved.

The divisiveness, the complete inability to make a minimal attempt to see another’s view or to question your own view, to learn or to develop is disappointing and exhausting. It’s most definitely not leadership.

Regardless of one’s party affiliation and regardless of one’s view of the role of government, don’t we all want public officials who will listen to us, respect us and understand our perspectives? Please permit me to recommend a few skills that would be worth your while to develop regardless of your status come November as they are beneficial to us all:

Civility. Any elected official should be diplomatic and civil. S/He should not be encouraging one group of Iowans to take up arms against another group of Iowans. I can’t believe that even had to be stated. Foster dialogue. Find common ground. Be respectful of everyone.

So, “Wake up, voters of District 10!” I say. To quote the hopefully soon-to-be-ex-Senator Chapman, “Now is not the time to sit silently on the sidelines!”

Vote for a moderate. Vote for Warren Varley — someone who will actively listen, is open to new ideas, respects everyone and who has the ability to see perspectives outside his own. He’s sincerely interested in Iowans and wants to work for all of us. Varley 2020!

Letter to the editor: Iowa should learn moral of River Story

Letter to the editor: Reynolds tries to take credit for bill she fought

Letter to the editor: Reader pins hopes on herd immunity