The team was managed and coached by Leland Gilmore. He attended Simpson College and played baseball and football there as well as in the U.S. Navy, and with a team sponsored by Ellis Insurance.

Gilmore also was a Hall of Fame baseball and softball umpire. He umpired for more than 20 years. He was also a teacher and coach at Lehigh and State Center. Lee was obviously a good teacher and recruited many outstanding players to play for the Merchants.

Baseball became the key sport in this town of 315 people. In 1948 it was decided that lights would be a nice addition to the field in Linden. The cost to put up lights was $7,800. They held an automobile raffle in which they raised just more than $5,000, and $1,500 was donated by the community itself.

Linden was thus one of the first small towns in Iowa to have its own lighted field. Linda Richey of Panora, who was the daughter of Lee Gilmore, told me that when they turned on the lights, people came from a long ways away to watch the games.

Glenn Kerr, a general store operator, was chairman of the Linden Athletic Association, and E. L. Miller, a farm implement dealer, was secretary–treasurer. The rest of the board was made up of Leslie Overman, Barber, Wayne Grim and Ralph Reynolds, who are farmers.

When the bleachers were built the whole town turned out to help.

Games were played two times a week, usually on Sundays and Thursday. Admission was 50 cents for adults and 25 cents for children. Attendance was usually greater than the population of Linden. It was not uncommon for 500 people to attend.

They played in many tournaments, including the Iowa Open. They also played many traveling teams, including teams composed only of African-Americans from Kansas City, Louisiana and North Carolina.

They played all comers if they could get it scheduled. One team I found quite interesting that they played in 1956 was the All-American Girls Team. There was a crowd of 500 to see the girls team defeat Linden 2 to 1. They exchanged batteries though. This means the girls pitcher and catcher played with the Linden team, and the Linden pitcher and catcher played with the girls’ team.

It was still interesting, though, that the score ended the way it did. 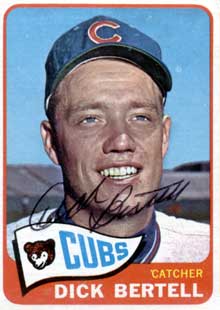 One Linden player made it the major leagues. His name was Dick Bertell, and he played for the Chicago Cubs. Phil Groth signed with the White Sox, and Jon Hockenberry signed with Philadelphia. Several others signed minor league contracts, including a player named Keith Engstrom.

One player by the name of Loren Ganoe from Redfield was offered a contract but turned it down.

In 1951 Bob Feller pitched for Linden in a Homecoming game against an all-star club of Iowans in professional baseball. Ganoe caught Feller just as he had in the previous four homecoming games. Ganoe had a brother, “Hoopie,” who was an outstanding player as well.

Bill Graney of Perry played with the Linden ball club. Bill had played professional ball in the 3 I league. Bill played a couple of seasons with Linden. He also played with Rippey as well.

Bill told me a couple of stories about his experiences with Linden. One had to do with John Paul Mills, who was an outstanding player on that team. He said John Paul liked to trash talk. John was usually an outfielder, and he also caught when the regular catcher was not there.

Bill said they were playing Coon Rapids, and John was catching. Coon Rapids had a player whose last name was McCarty. Bill said he was a big man and a good player. John was talking to him, saying not-so-nice things. Bill said finally McCarty turned around and grabbed John Paul by his catching gear. He said John Paul hit him five times before he knew what had happened. He then said Jim Wright, another Linden player, joined the fight. He said it was quite a scene.

He also said one night Lee Gilmore got very upset with him for leaving the field during a lightning storm. He had just returned from Salina and had seen four men get killed by lightning at a game. He came in from center field, and Linden had no other player to put in. He said Lee told him to get back out there, and Bill said, No way. He said they ended up calling the game and rescheduling it later.

Bill also commented on the umpires that were used in Linden. He said many times they were relatives of the players on the Linden team. They weren’t biased, I’m sure. Bill played with a team called the Hylback Wildcats. This team was a mixture of Perry players as well as some from Madrid. He said it was very well known in Dallas County. He also said it was a very good baseball team.

The New York Yankees held a tryout in Linden in 1951.

The Linden Merchants played until 1959 or 1960. The team was obviously a great source of pride for the town of Linden. Many very good local players played for the Merchants. Lee Gilmore was an outstanding coach and was able to get these players to come in and play. Many of his players came from Simpson College. Lee had attended that school.

His record and the team’s record speaks for itself. I think this quote from Lee pretty much summarizes his philosophy and the team’s: “We’re there not to win every game but to give to the fans the best baseball possible.” They accomplished that beyond a doubt.