“This will take some getting used to,” said one passerby Thursday as a crew from Slater-based Iowa Plains Signing Inc. laid down new lines for the reconfigured intersection at First and Willis avenues in Perry.

Workers began by removing some of the old lane lines by means of a high-pressure water hose. The power of water pressurized to 36,000 pounds per square inch was enough to blast off the old white and yellow lines, many of which were already well worn on Iowa Highway 144. 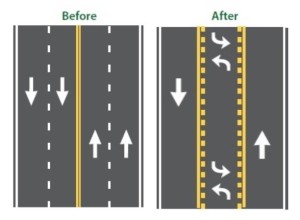 The reconfiguration of First Avenue converts the street from four to three lanes between Otley Avenue and Bateman Street, with two opposing traffic lanes separated by a center turning lane.

The city expects ultimately to make First Avenue a three-lane street between Iowa Highway 141 and the northern boundary of the city.

The $380,000 project was completely paid for with state-administered U.S. Department of Transportation (DOT) dollars. The Iowa DOT is investing funds from the Traffic Safety Improvement Program in the Perry intersection because it carries a high volume of traffic. Not all portions of the state highway are as heavily traveled.

For example, the Iowa Department of Transportation is considering transferring jurisdiction over a 12-mile stretch of Iowa Highway 144 to Greene County, as reported in the Greene County News Online. The portion of roadway between U.S. Highway 30 in Grand Junction and the northern border of Greene County is “not in the greatest shape,” according to Greene County Engineer Wade Weiss.

Opinions about the redesigned intersection were mixed among Perry motorists. One called the project “wasted money,” and another said the “traffic moves smoother with the four-way stop than it ever did before.” One even claimed the changes will make the intersection more dangerous and not less, although statistical evidence collected by the U.S. DOT contradicts the claim.

One out-of-town visitor to Perry, replete with lunch from the David’s Diner in the Hotel Pattee, approved the redesign and humorously called it a step in the journey to “make Perry great again.”