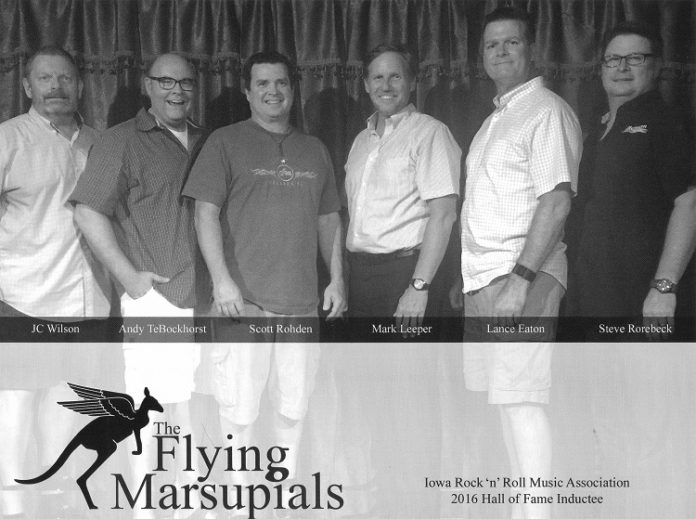 Two veteran Iowa rockers with roots in the Perry area will be inducted into the Iowa Rock ‘n’ Roll Hall of Fame in ceremonies Sunday at Lake Okoboji.

J. C. Wilson of Perry, longtime guitar wizard with the Flying Marsupials, and Toaster rocker Hal Thompson of Minburn will join the select company of more than 400 musical artists inducted by the Iowa Rock ‘n’ Roll Music Association into the Hall of Fame since 1997.

Wilson’s induction is in concert with the Flying Marsupials band, who formed in 1989 and quickly established themselves as a premier party band in central Iowa. Taking the stage with Wilson Sunday in Arnold’s Park will be fellow marsupials Andy TeBockhorst, Scott Rohden, Mark Leeper, Lance Eaton and Steve Rorebeck.

Wilson’s musical pedigree predates his marsupial days by nearly 20 years. His first public performance was in the gymnasium at St. Patrick School in Perry in 1972 as a member of the Perry teen sensations Fixx.

Wilson and fellow Fixx fixtures Mark Einck, Jim Wuebker and Larry Nichols later rebranded themselves Rukkus, and the band went through various changes in membership through the years, as did the lineup of the Flying Marsupials. All the players had full-time lives outside the bands, and Wilson himself is now the owner and operator of the Otley Cat bar in Perry and Streetcar 209, a Des Moines nightclub formerly known as the House of Bricks.

The band still plays publicly on rare occasions. Wilson said the 20-minute set Sunday at Okoboji might well be the last show for the Flying Marsupials.

Minburn rocker Thompson has played professionally, both with Toaster and as a solo artist, for more than 20 years. He wrote, recorded and produced his own records and still plays guitar for Toaster, moving easily between lead and rhythm guitar and hard rock and soft folk. He also teaches songwriting, voice, theory and studio production.

The rock ‘n’ roll weekend will start Friday night with a lifetime members’ party in the Majestic Pavilion at Arnold’s Park, followed by a kick-off concert in the Roof Garden Ballroom. Saturday will be busy, beginning with a pancake breakfast and including an opening ceremony, silent auction, vintage car show, swap meet, battle of the bands, ice cream social and an evening meet and greet for inductees and the public — formerly known as groupies.

Sunday’s induction ceremony starts at 2 p.m. in the Sami Center, followed by an autograph party in the Majestic Pavilion at 4:30 p.m.  The Induction Spectacular Concert starts at 6:30 p.m. and jams until midnight in the Roof Garden Ballroom.

Here is the full lineup of 2016 Hall of Fame inductees:

Here is the lineup for Sunday’s Induction Spectacular Concert: