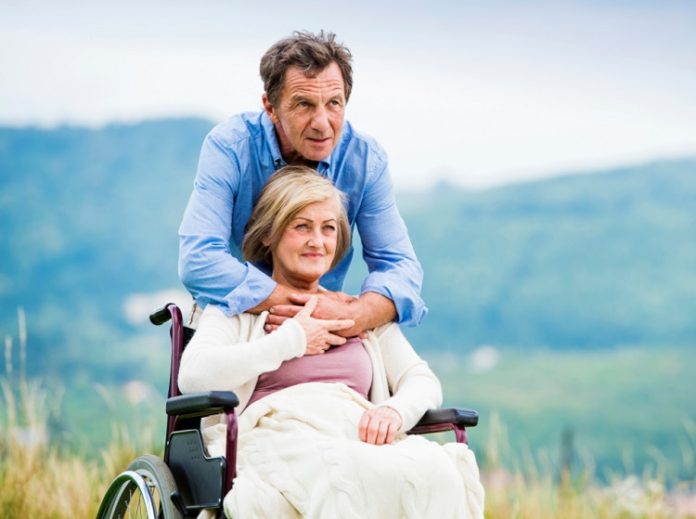 “. . . a few hours later, having taken the first flight to Dallas, I walked into the ICU, past friends and neighbors who looked relieved that ‘the one with all the answers had arrived.’ I didn’t even know the questions. As I saw my father lying unconscious among the monitors and tubes, I was overwhelmed. Then it hit me. There was no instruction manual for what I was facing — and facing alone. I hadn’t a clue what to do next nor what was to come.”

Comer was a successful actor and writer when he quit his job in 1996 and moved back to Texas to care for his parents — a life-changing choice.

“This was not planned parenthood,” he joked with the conference crowd in Altoona. “It was terrifying,” he confessed.

His father was reeling from a stroke, and his mother had Alzheimer’s.

“As a caregiver you will have your Meryl Streep moment,” he said, and you learn to improvise and and acquire the skill of “therapeutic lying.”

It can be incredibly difficult to do, he said, forcing yourself not to sigh or roll your eyes or give other indications of frustration and of being at your wit’s end. But Comer learned to give care and shared with the audience what he learned as a caregiver:

“When you’re faced with a choice of your parents being wrong and you being kind,” he said, “go with kind every time. Always opt for kindness. Patience is the currency of love. I learned a new word — unselfishness.”

Comer said the burden of his 14-year journey of caregiving “became not a chore but a calling. We need to keep answering that call no matter what happens.”

Along with unselfishness, he said he learned the art of patience.

“How can I make this work for her?,” he asked—referring to his mother with Alzheimer’s. “It’s not about me, I realized. I just stopped where she was and said. ‘My job. My only job.’ Answer without comment or criticism.”

To find out more about Comer’s journey and the learning he shares with other caregivers, see his book, “When Roles Reverse: A Guide to Parenting Your Parents.”

Quinlan Avenue to close for two months for widening