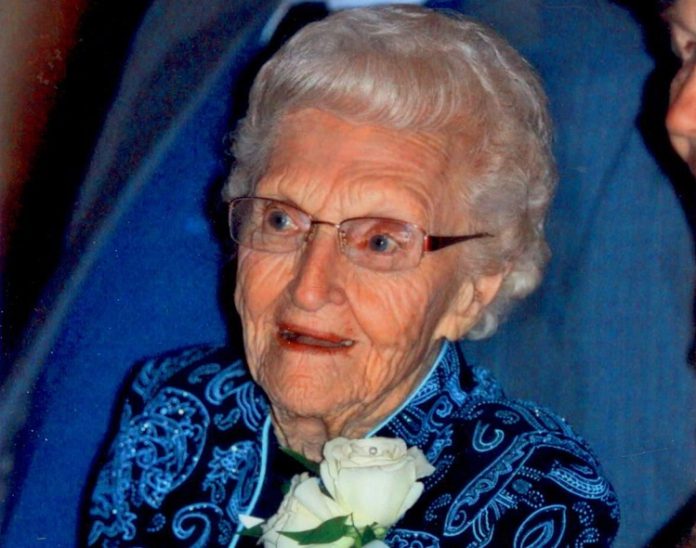 Burial followed at St. Joseph Cemetery in Jefferson. A lunch was served by the ladies of the Church at the Parish Center.

Margaret grew up with an older brother, Claude, and a much younger sister, Jackie.

Margaret attended school in Jefferson, graduating from high school in 1932. While attending school, she worked for the sheriff’s family. One time she locked a patrolman in the jail without realizing it. He did not forget it.

After graduating, she worked as an operator for the telephone office and the J. C. Penney store. While working at Louie’s Candy Kitchen, she met Charles Almon “Chick” Hastings, a young widower from Jefferson.

She wrote that dancing was a favorite of the couple, going to dances at Lake Robbins in Bouton, the Starlight in Carroll and River View in Des Moines. They enjoyed playing cards with neighbors, and her love of playing cards with her children and their spouses carried on for years.

Margaret accepted Chick’s proposal and had an instant family, as Chick had a young son, Kenneth, from his previous marriage.

They lived in Jefferson as Chick trucked. They later moved to a farm southeast of Jefferson.

Margaret said they were married seven years before she received a diamond.

The family took a car trip in 1950 and vacationed in Oregon and California and visiting Margaret’s family.

In May 1951 Chick was tragically killed in a head-on crash east of Jefferson.

Ken was stationed with the U.S. Army during that time (Korean Conflict) and returned home to farm the family farm. As they had always done, the children pitched in with the cows, milking twice daily and doing field work.

The children grew up knowing of her hard work and, in later years, realizing what a sacrifice it was.

Margaret renewed her old friendship with a very nice man by the name of Harold Conroy. He asked Margaret to marry him, and they were married in August 1962 at the St. Joseph Rectory.

In spite of Margaret’s concern, Harold accepted his instant family. He was a prince of a man and fit right in. This was the beginning of a wonderful marriage as well as the beginning of her great love of Harold’s church. She was a devout member.

Margaret was a member of the Guild and also enjoyed her membership and friends of the Hardin Friendly Club. Margaret became a farm wife, once again, on the farm west of Dana.

She was devoted to Harold, always putting him first. This caring continued after they had their farm sale and moved into Jefferson to live on West South Street. Her love and attention to his needs never wavered. Harold died in May 1999.

Margaret continued to live in her home, very independently! She moved into The Gardens assisted living facility in 2008 and indeed stayed self-sufficient for several years. She was kidded quite often about running over people with her walker.

Margaret was a people person, never knowing a stranger. This was the biggest reason she enjoyed her weekly trips to Tama for those many years. The bus rides to and from the casino were the best, and the friends on the bus made over her. She enjoyed the slots, and of course, her cup of chili.

Margaret was a voracious reader and made many trips to the public library. Kay remembers her mother’s earlier years of being a 4-H leader and the dance costumes for the three girls that she sewed.

Her family will always remember her generosity with monetary gifts to each and every child of her ever-growing family. She didn’t miss birthdays, anniversaries, special occasions or Christmas. Just ask: her sugar cookies, lemon pies and chocolate pies were incredible.