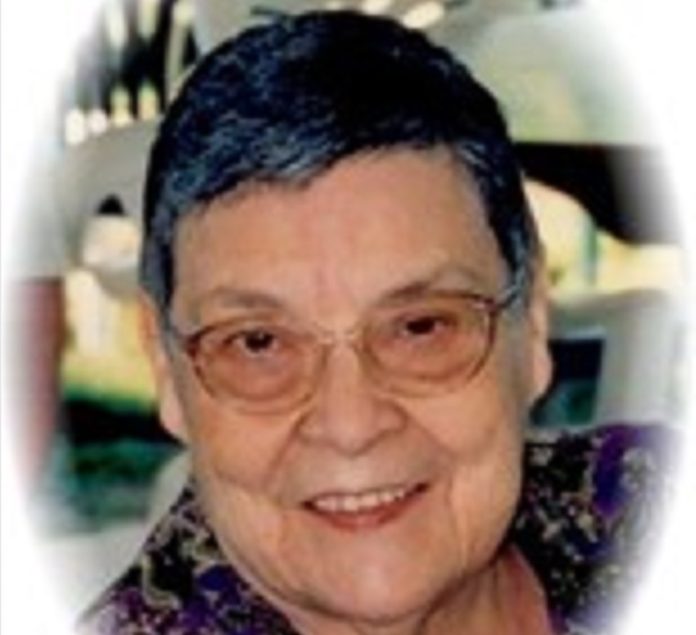 A service for Mary Joan Blaisdell was held at 10:30 a.m. Wednesday, June 1 at the Trinity Lutheran Church in Perry. Visitation was after 1 p.m. Tuesday, May 31 at Hastings Funeral Home in Perry, with family present from 6-8 p.m.

Mona Holstrom was organist. Larry Blaisdell sang “I’ll Fly Away” and “Rock of Ages.” The congregation sang “Beautiful Savior” and “Abide with Me.” Interment took place at Violet Hill Cemetery in Perry. Following the service at the cemetery, a luncheon was held at the Trinity Lutheran Church.

Soon after her birth, she was adopted by Ferdinand and Cora Belle (Drake) Clausen of Dexter. Mary Jo joined a loving family complete with a brother, Frederick.

She attended school at Penn Center in Dexter and graduated from Dexter High School in 1947 as valedictorian. Mary Jo then attended Iowa State Teachers College (now UNI) at Cedar Falls. She transferred to Simpson College in Indianola for two years, graduating in 1951 with her bachelor’s degree.

Mary Jo taught in a rural school before teaching elementary school in Perry.

On June 29, 1952, she married Harvey Blaisdell Jr. at Zion Lutheran Church in Dexter. They were blessed with five children: Mary, Harvey, Shirley, Vickie and Larry.

She was a wonderful homemaker, providing a loving home for her husband and children. Of course, that love continued on to her grandchildren and great-grandchildren.

Her years in 4-H as a youth prompted her to assist her girls with their 4-H projects. Mary Jo was a Cub Scout Den Mother, had a green thumb, loved nature, enjoyed counted cross stitch and was a great baker.

She was a devout Christian, and that love glowed throughout her life. She loved reading and had read her Bible five times front to back. An active member of Trinity Lutheran Church in Perry, Mary Jo sang in the choir, played the piano, taught Sunday School and Vacation Bible School served as an officer of AAL and Lutheran Women Missionary League.

For many years she volunteered at the Perry Lutheran Home and served on the Auxiliary Board of the Lutheran Home.

In 2008 she transferred her church membership to Faith Lutheran Church in Adel and attended when her health allowed.

Memorials may be left at Hastings Funeral Home in Perry.