One year later, that plan has been executed in a beautiful work, “In Flanders Fields,”  by Perry artist Betsy Peterson. The work will be unveiled Wednesday as part of the 2015 Veterans Day ceremonies.

The artwork will hang on the west wall of the performance center lobby and will feature about 200 hand-made poppies growing in a field crossed by grave markers, an allusion to the famous World War I poem from which Peterson’s artwork takes its name, “In Flanders Fields” by John McCrae:

In Flanders fields the poppies blow
Between the crosses, row on row,
That mark our place; and in the sky
The larks, still bravely singing, fly
Scarce heard amid the guns below.

We are the Dead. Short days ago
We lived, felt dawn, saw sunset glow,
Loved and were loved, and now we lie,
In Flanders fields.

Take up our quarrel with the foe:
To you from failing hands we throw
The torch; be yours to hold it high.
If ye break faith with us who die
We shall not sleep, though poppies grow
In Flanders fields.

Lieutenant-Colonel McCrae, a Canadian physician in World War I, wrote the poem on May 3, 1915, after his friend and fellow soldier Alexis Helmer was killed in the Second Battle of Ypres. The Belgian battleground around Ypres was the scene of three major battles during the 1914-1918 war, claiming more than 750,000 casualties. The Second Battle of Ypres is also notable for the first mass use of poison gas during the war.

“The idea for the work came to me last year,” Peterson said Monday, “when Linda Kaufman pinned a poppy on my sweater for Veterans Day.”

Peterson said she was also inspired by the work of British artists Paul Cummins and Tom Piper, who in 2014 filled the Tower of London’s moat with 888,246 ceramic poppies, each representing a British or colonial military fatality during the war.

The title of Cummins and Piper’s work, “Blood Swept Lands and Seas of Red,” came from a poem by an unknown World War I soldier who died in Flanders.

Like their British counterparts, Perry’s poppies are ceramic. The petals were created last summer by about 40 volunteers who rolled out the clay in individual leaves that were later fired in the kiln of Eric Peterson, Betsy’s husband, an master potter.

“Every poppy in unique,” said Linda Kaufman, former English instructor at Perry High School and the project’s volunteer organizer and chief fundraiser. “We had volunteers of all ages, from adults to retirees to kids, and some rolled the clay more thickly and some less thickly.”

In the center of each ceramic flower, in place of pistil and stamen, is the image of a human face. In the McCrae poem, the dead speak, and in Peterson’s work, “the faces show each flower has a soul,” she said. “Just like the poppies, the dead ‘lived, felt dawn, saw sunset glow,’ and there is other evidence of their ephemeral lives scattered on the ground, the letters home, the pictures of girlfriends, the scraps of their brief lives.”

As the poem says, the war dead, who “loved and were loved,” also pass the torch to their successors and say it is up to the living “to hold it high.” Peterson said her work aims to show “the things that last and really matter are our loved ones, our human relationships in this life, not the cars we drive or the houses we live in.”

Kaufman said an initial $2,000 gift from the Glen H. Theulen Memorial Fund soon attracted matching amounts from the Dallas County Foundation, the Bock Family Foundation and the Perry Community Schools Foundation. A number of smaller private donations completed the effort and covered the $10,000 cost of the project.

About 116,000 U.S. soldiers died in World War I, which it entered in April 1917. It is estimated the European countries saw about 10 million soldiers killed and 7 million civilians. The period of the war and the decade following saw a notable flowering of European literature, including British poetry. McCrae’s famous poem is one example, as is the poem “Here Dead We Lie,” written by the English poet A. E. Housman in 1914. 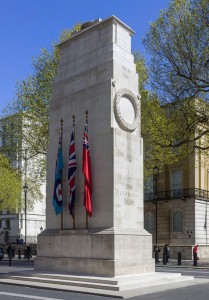 Here dead we lie
Because we did not choose
To live and shame the land
From which we sprung.

Life, to be sure,
Is nothing much to lose,
But young men think it is,
And we were young.

Peterson’s “In Flanders Field” will be unveiled at Veterans Day ceremonies starting at 10 a.m. Wednesday at the Perry Performing Arts Center. It will also be available for viewing during Art on the Prairie, Saturday, Nov. 14 from 1-5 p.m. and Sunday, Nov. 15 from 1-4 p.m.

With two weeks till show, rehearsals intensify for musical