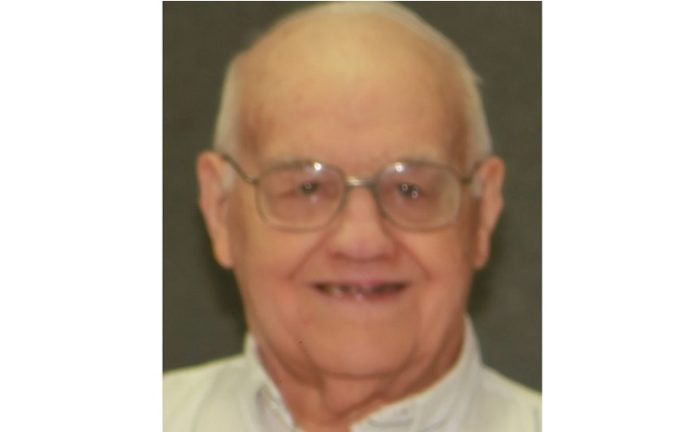 Merle Blake, 90, of Ankeny and formerly of Perry and Audubon passed away Saturday, March 7, 2020, at the Mercy One Johnston Hospice in Johnston, Iowa.

Funeral services will be held Wednesday, March 11 at 10 a.m. at the First Baptist Church in Brayton, Iowa. Visitation will be Tuesday, March 10 from 5-7 p.m. at the Carris Family Funeral Home and Cremation Care in Perry. Burial will be at the Arlington Cemetery in Audubon.

Memorials will be given to Merle’s family for designation at a later time and may be left at the funeral home. Online condolences may be sent at www.carrisfuneralhome.com.

Merle Dean Blake was born July 11, 1929, in Audubon County, the third child in the family, to William and Alice (Stewart) Blake.

He grew up in Adair, Guthrie and Audubon counties.

Merle was united in marriage to Ruby Ilene Crees Feb. 5, 1950, in Audubon County. They recently celebrated their 70th anniversary.

They settled in Dallas County near Perry in 1954 and lived there for more than 50 years. In 2010 they relocated to Audubon.

Merle was employed as a farmer, when he first married and as ahired hand for area farmers. He started with Osmundson Manufacturing in Perry and then worked at John Deere in Ankeny, finally hiring on with Roy Bathel in 1963 at gas station/repair shop in Perry.

In 1967 Merle became owner and operator of the business and operated Merle’s Super Service for 25 years. Through his years, it was called Gulf and Citgo, with gas going from $.29/gal to more than $4/gal, and he sometimes pumped gas at a loss just to keep customers coming in. He expanded the business to include U-Haul, Arien’s mowers, a wrecker service and AAA.

Merle sold the business in 1991 and began working for a variety of other businesses. With his love of driving, he began doing Iowa deliveries for Pony Express and then became a courtesy driver for Stew Hansen Dodge in Des Moines.

He had a love for all things American and Iowan. He enjoyed drives through the country, college basketball and football, especially the Iowa Hawkeyes.

Merle and Ruby had a life-changing encounter with the Lord in 1960-1961. The First Baptist Church in Perry was hosting John Carrara, a traveling evangelist. Raymond and Thelma Lane and the Carl Johnsons invited them to attend four different nights, with Merle and Ruby giving excuses, but the Lanes wouldn’t give up.

Finally, Merle and Ruby consented to attend and through the preaching of the Gospel of Jesus Christ, he was born again and water baptized in the First Baptist Church in 1961 under the ministry of Pastor Johnny Kain. This became their home church for decades and where he served as trustee, deacon and Sunday school teacher.