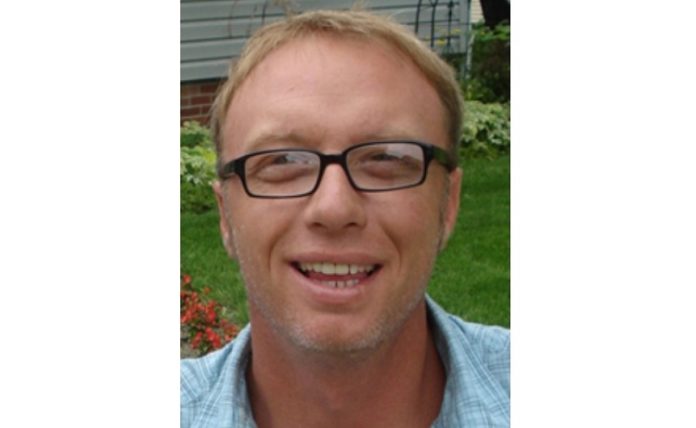 Memorial services will be held Saturday, Nov. 9 at 1:30 p.m. at the Carris Family Funeral Home and Cremation Care in Perry. Burial will be in the Valley View Cemetery near Perry. Visitation will be Friday, Nov. 8 from 2-7:30 p.m., with family present 5:30 to 7:30 p.m. at the funeral home.

Family has requested any memorials be given to a college fund to be established for Mike’s daughter, Savannah, and may be left at the funeral home. Online condolences may be sent at www.carrisfuneralhome.com.

He served his country in the U.S. Navy immediately following graduation from high school.

Mike was united in marriage to Tiffany Secress at Sportsman Park in Dawson July 31, 2010.

After returning to Perry, he worked as an animal well being officer at Tyson Fresh Meats and most recently was a forklift driver for Menard’s in Grimes.

Mike was a proud metal artisan and loved creating metal artwork. Mike could be found in his garage workshop day and night. He sold his artwork online and throughout the local area.

Mike was also an avid coin and stamp collector.

He enjoyed bonfires on a cold or warm night.

Mike’s love of nature extended to his affinity for animals. He found great refuge in caring for stray animals. His dog, Puppy, was a faithful companion to Mike through the years. As divine timing directed, Puppy recently passed away, and he and Mike are once together again, continuing their journey.

Mike lived in Alabama for several years and continued to have friendships from his time there.

He was known as a free spirit unencumbered by material possessions. Bicycling or walking was an accepted mode of transportation for Mike in his younger years. His barefoot trek across the country, following his favorite band, provided endless opportunities to relish the simple pleasures of life. Mike was always content to live simply and share freely.

He was always willing to help out others when they were in need.

He deeply loved his only child, Savannah. They enjoyed time spent outside together, riding bikes, getting popcorn at the local popcorn stand, going for drives and working in the garage. Savannah enjoyed helping Mike work on his metal creations or assisting him with his woodworking.

In death he rejoins his mother, Janiece; brother, Jeffrey Sloss; and grandparents, Peggy and Hans Nicolaisen and Max and Lucille Sloss. He was also preceded in death by Savannah’s grandfather, Bill Secress.

Left to cherish Mike’s memory are his father, Thomas of Perry; daughter, Savannah Sloss of Perry; sister, Dawn Dunker of Fairmont, Minn.; Savannah’s mother and grandmother, Tiffany Sloss Secress of Perry and Paula Secress of Perry; and step-daughter, Amani Al-Rashid of Ames. Mike will always be remembered by his large extended family of relatives and by his many friends from Iowa and Alabama.