The 100-year-old Minburn Depot, put down beside the Raccoon River Valley Trailside two summers ago, restored by the Minburn Betterment Committee and then reopened last summer, has a new occupant set to open for business July 4.

Nineteen14 is the name chosen by Jeremy Mahler for the depot’s new tavern and restaurant. The new name alludes to the year of the depot’s original construction: 1914. 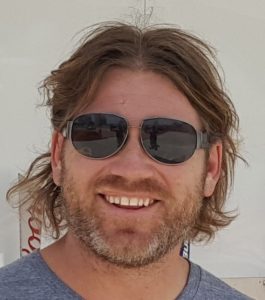 “Our grand opening is July 4,” said Mahler, a Perry High School grad now living in Des Moines. He signed the lease about one month ago, he said, and with the help of his father, John Mahler of Perry, held a kind of soft opening last weekend, selling beers to the many Baccoon Riders passing by.

“This at least lets people know we’re here and soon to open,” Jeremy Mahler said. Once open, he said, the restaurant will feature items of classic Americana.

Mahler has a track record in Des Moines as a successful businessman, operating the Liar’s Club until 2013 and the Bombay Bicycle Club until 2014.

“This is a great location and a gorgeous building,” Mahler said. He has completely rebuilt the depot’s bar, using barn boards from the Huxley area on the top and beam boards on the sides that match the depot’s original wainscoting.

“We were lucky to find these,” Mahler said of the beam boards. “They’re a perfect match.”

There are tall wooden cabinets and a two-door cooler yet to be installed. All suit the decor of the early-twentieth-century design.

Other new interior touches include window shades memorializing the Singing Wheels Skating Show, a Minburn rollerskating sensation from 1951 to 1963 that drew as many as 10,000 people from across the U.S. to the group’s annual three-day run at the town’s skating rink.

One shade features a closeup of Singing Wheels co-directors Jacquelyn Snyder and Dee Thompson, who led the effort from 1956 to 1963.

Snyder died in 2014, and memorials in her name, given to the Minburn Community Betterment group, helped pay for the window dressings.

If you like fresh stories about goings on in our local towns, then please become a donor and help support ThePerryNews.com’s work with a recurring donation of $5 per month.