Parker has been a United Methodist missionary for 12 years. She has recently spent 3 years in Nepal and has previously served in Cambodia, Ghana, and Japan.

Parker is originally from California but lived in Iowa from 2001-2003, working for Practical Farmers of Iowa and performing campus ministry at Iowa State University. She has a master’s degree in microbiology.

Parker is currently on a 12-church tour in the U.S., speaking to congregations and encouraging interest and support of her missionary work in the southern Asian country of Nepal.

Situated high in the Himalaya Mountains, the landlocked country of 27 million people is bordered by China-controlled Tibet on north and on the south, west and east by India. The politics of both China and India greatly influence the country of Nepal.

The United Methodist Church participates with other Christian groups in a collective organization called United Mission to Nepal. The organization’s slogan is “Ecumenical fullness of life for all in a transformed Nepali society.” 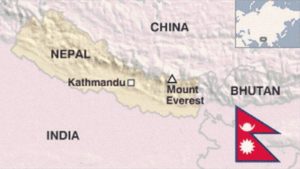 Until 10 years ago, the official religion of Nepal was Hinduism. Since the end of the country’s 10-year civil war in 2006, there has been no official state religion. About 80 percent of the population is Hindu, with another 10 percent Buddhist, some 4 percent Muslim, about 3 percent Christian and less than 1 percent is Animist.

Nepal suffered a 7.8 magnitude earthquake in April 2015 that affected 25 of the 75 districts of Nepal. This included the capital of Kathmandu. The earthquake killed about 9,000 people and destroyed many structures. Fortunately, the earthquake occurred around noon, which meant most of the population was working outside on their farms and were not in the buildings that collapsed.

In the districts affected by the earthquake, farmers lost all of their seed stock for the next season because they had already planted their crops. New seed had to be brought in from India because Nepal is not able to produce enough seed stock for the country’s needs.

Parker said most of the buildings in Nepal are built of stone and mud with no support, which makes them very unstable in an earthquake. Her house live in Kathmandu was built with concrete and re-rod, so it was not affected. For many months, there were daily 4.5 magnitude aftershocks, and there still are occasional aftershocks to this day.

In the rural mountainous areas, the earthquake did a lot of damage. Avalanches occurred all over these regions, destroying homes and crops and making mountain roads impassable. Water sources were also altered or changed by the earthquake. Food was distributed using helicopters and machinery that could get up the mountain roads, and in some cases people walked for many hours to obtain food from relief agencies.

Parker reported on several projects of the United Mission to Nepal in several areas of the country, such as school buildings and education programs for children. Other programs include helping families develop sustainable lively hoods, starting hospitals, building dams, teaching maternal and child health, distributing food after the earthquake, working with people with HIV, producing seed stock, working with minority groups in Nepal and working with those of lower Castes.

Several Christian groups forming part of the United Mission to Nepal are based in India. There has been a focus on missions for rural Nepal, but there is also need for reform in urban Nepal.

She helps the population learn to test water sources and storage areas and properly handle sanitation problems. Many of the water supplies are safe, she said, but a lot of contamination occurs in the handling. There are several methods available, including many ancient practices that work well. One of these is storing water in copper vessels.

Agriculture in Nepal is subsistence based.  About 80 percent of the population works in agriculture or related fields. The country’s top export is human labor. Many people work seasonal construction jobs in India, while others travel to Malaysia or the Middle East for jobs. Napoli laborers suffer many human rights violations working overseas, particularly in the Middle East. Spouses of migrant workers are at risk for HIV infection.

The Caste system was officially abolished in Nepal but still exists in practice. Many of the people from the lower-Caste backgrounds face discrimination and struggle to survive.

Arranged marriages are also normal. This practice is becoming less common but is still common. If a woman in Nepal is pregnant, the fact was traditionally kept secret. United Mission to Nepal is working with woman to change this practice and help them to get proper medical care and nutrition while pregnant.

About 50 percent of births occur in the home. The mortality rate among children aged 5 and younger has decreased, but there are still many deaths of children within five days of birth.

Nepal has a lot of potential for hydroelectric power in the future and also for tourism, both of which could bring to the country much-needed income.

As Nepal’s government becomes more stable, roads and other infrastructure will improve. Many improvements have been made since the earthquake.