Teen suicides not only devastate families, they send shock waves through schools and communities. Students in the Perry Community School District felt these shocks at firsthand in the last two years. But there are other symptoms of mental illness–less drastic but no less important–that we sometimes overlook or ignore or shrug off.

To help inform the Perry community about both the facts and myths about mental illness and suicide awareness and prevention in young people, Perry’s First Christian Church E.D.G.E. Children Ministries sponsored “Speak Out,” a presentation Wednesday evening at the McCreary Community Building in Perry.

About 100 attended the 90-minute lecture and discussion, led by two Des Moines-based spokespersons for the National Alliance on Mental Health (NAMI), Brittney Hindman and Alex Shrewsberry. Brian Moorhead of Perry, who works with Hindman in Des Moines as a substance-abuse counselor, introduced the presenters and offered a sobering testimonial about the value of mental health services in his own life.

Hindman, a Master of Social Work, therapist at Mainstream Living and an advocate with the Greater Des Moines chapter of NAMI, started off with some facts. She exploded myths about mental illness while empowering her listeners with accurate information. Hindman also praised the Perry audience for being already so well informed about mental illness.

While she delivered facts, her co-presenter, Shrewsberry, 23, a student at Grandview University and organizer of the Grandview NAMI chapter, offered himself as a case history and frankly discussed his history of anxiety, bipolar depression, post-traumatic stress disorder  as an adult survivor of child abuse.

Shrewsberry described the symptoms of his illness, including acts of self-harm and an attempted suicide,  and he told about his recovery and the path back from severe depression. He and Hindman often shared stories and illustrated one another’s points in the informal atmosphere.

The Perry audience was actively engaged and asked many questions. They did not seem surprised to learn from Hindman that: 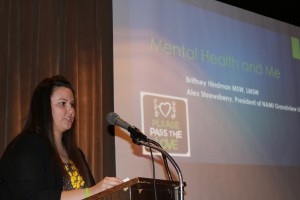 “Anybody in this room can make a difference,” Hindman said hopefully. Young people need to take seriously the signs of their friend’s suffering, she said. They must not be afraid to talk and ask direct questions but without promising not to tell anyone else. And they must tell an adult, she said.

Shrewsberry talked at length about the harm done by the stigma of mental illness. Stigma is the bad reputation, often based on ignorance and fear, that clings to mental illness and leads people to treat the mentally ill as if they have a weak character or are morally corrupt.

“Stigma is hugely damaging,” Shrewsberry said. “It can make people reluctant to seek help and compounds their depression and feelings of self-hatred. Stigma costs them the empathy of others and costs them opportunities at school or work. It can even lead to violent bullying or harassment,” he said.

Before fielding questions from the audience, Shrewsberry recited a poem. “This is for anyone who’s ever had trouble with their feelings,” he said.

After the event, a spokesperson for the sponsors said, “On behalf the E.D.G.E. Children’s ministries, we would like to thank everyone who took time to come out to the ‘Speak Out’ presentation, with a special thank you to Brittney, Alex and Brian for all your hard work and dedication to make this presentation happen. And just a reminder to all to ‘Fight the Stigma!'”