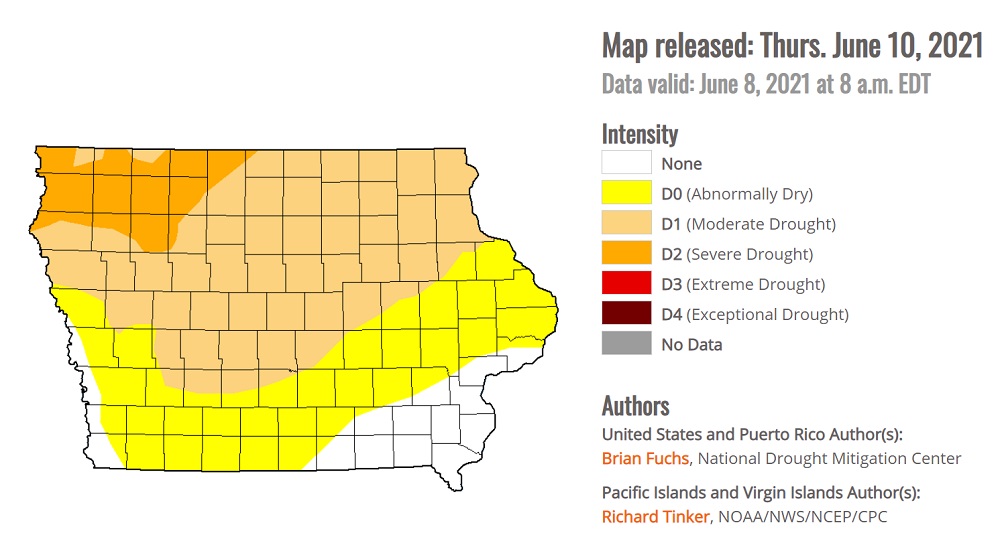 DES MOINES, Iowa — Precipitation averaged more than one inch below normal for the month of May, stream flows are dropping, soil moisture is low and shallow groundwater conditions are a concern in several areas of the state, according to the latest Water Summary Update of the Iowa Department of Natural Resources.

Nearly 90% of Iowa is experiencing some degree of dryness or drought. The most recent U.S. Drought Monitor map shows 32% of the state rated as abnormally dry, 47% rated as in moderate drought and 10% rated as severe drought.

“Below average rainfall in May and for the start of June has pushed all of the drought indicators lower,” said Tim Hall, the Iowa DNR’s coordinator of hydrology resources. “Some water utilities are beginning to implement voluntary and mandatory water conservation measures and with demand for water increasing with warmer weather, restrictions could become more widespread. Regular June and July rainfall of an inch or more per week is needed to reverse this trend.”

Rainfall in the second week of May brought much needed relief, especially to the southern third of Iowa, where about 15% of abnormally dry conditions resolved. With warmer and drier conditions building in during the first week of June and below average rainfall over the last seven to 10 days, drought conditions significantly expanded across the northern two-thirds of Iowa, with additional expansion into southern Iowa.

Only southeastern Iowa is currently free of abnormally dry and drought conditions.

In May Iowa’s statewide average precipitation totaled 3.71 inches, which was 1.13 inches below normal. Monthly precipitation totals ranged from 1.95 inches in Akron in Plymouth County to 8.53 inches near West Point in Lee County.

The U.S. Army Corps of Engineers forecasts that runoff in the Missouri River basin above Sioux City will be 17.9 million acre feet (MAF), or about 69% of average runoff. Based on monthly studies, drought conservation measures of reduced navigation flow support on the Missouri River will be enacted July 1.

The Iowa Water Summary Update is prepared by technical staff of the Iowa DNR, Iowa Department of Agriculture and Land Stewardship, IIHR—Hydroscience and Engineering and U.S. Geological Survey, in collaboration with Iowa Homeland Security and Emergency Management Department.