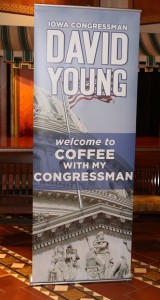 Iowa’s Third District Congressman David Young stopped in Perry Saturday for a Coffee with My Congressman event at the Hotel Pattee. This made two weekends in a row the Van Meter Republican made the drive to Perry. Last weekend he enjoyed Kiwanis Club pancakes in an under-the-radar visit.

About 50 Perry-area voters joined Young and his staff in the hotel’s Nicolette Room for the hour-long session. Young opened the meeting with a brief account of his latest actions in Congress — noting his support for the recent repeal of the No Child Left Behind Act, his opposition to the Environmental Protection Agency (EPA) Waters of the U.S. rule and his abhorrence of human trafficking– and then he randomly drew attendees’ questions from a basket and briefly answered them.

Before replacing Iowa’s 10-term Congressman Tom Latham in 2015, Young spent most of the previous 20 years working for Republican Senators in Washington D.C., including seven years as chief of staff for Sen. Chuck Grassley. Young moved to Van Meter in 2013, with an eye to running for retiring Sen. Tom Harkin’s seat, but machinations within the 2014 Republican state convention brought forth Young as the party’s candidate to seek to fill Latham’s vacancy.

Young referred to his district as the “sweet 16,” the collection of 16 southwestern Iowa counties that includes the state’s most populous county, Polk County, as well as the two most void of human population, Adams and Ringgold counties.

Just as Young’s mentor, Chuck Grassley, learned in 2009 that the fear of the Tea Party is the beginning of political wisdom, so Young sports the fashionable anti-government rhetoric demanded today even of moderate Republicans. Every insider must pose an anti-government outsider.

If one scratched his surface, Young might even trot out other classics of ’80s-era Reaganomics, such as the Laffer Curve and trickle-down theory.

In person Young is a sensitive, soft-spoken politician. This was clear in his discussion of education. He said he never understood the problems with the No Child Left Behind Act until he spoke with a Creston teacher who “was moved to tears. That really connected with me and helped me understand what was happening,” he said.

He believes control of education should be firmly fixed at the local level. From central powers, such as the U.S. Department of Education, come “rules and regulations,” a phrase Young often repeated Saturday as the chief evil of big government.

“I think that parents should be the ultimate arbiters of how their children are educated,” Young said, but this should not be mistaken for his full-throated advocacy of home schooling. When a local home schooler asked for government help in buying books and materials, Young told her the federal government should not fund home schooling because with such dollars come “rules and regulations.”  The only way to to keep Iowans free from “rules and regulations” is to keep them free from federal dollars.

“Folks in Washington D.C. may have great intentions,” he said, “and I believe they care about children. Of course they do. But they are not on the ground, and they don’t see children’s faces. Teachers teach differently with kids, and that’s where we need to make sure we have the concentration of teaching, not in D.C. but in the local classroom. So we passed a bill called the Every Student Succeeds Act, which repealed No Child Left Behind.”

A teacher’s tears, children’s faces —  these are the human-scale realities that shape Young’s votes on the House Appropriations Committee and on the floor of the House, he said. What he opposes, like his mentor, are the “rules and regulations” handed down by unaccountable government bureaucrats who work unseen in Washington D.C. cubicles.

“When rules and regulations come out, they have the same effect as law, and you don’t even know who’s writing it,” Young said. “It can be very frustrating just trying to find out who’s writing it.”

These unelected government bureaucrats also find it easy to ignore the voices of the people, he said, whether the issue is education or clean water.

“When rules and regulations are proposed, there’s not a lot of comments from the real stakeholders that these affect,” Young said. “I think particularly of the EPA’s Waters of the U.S. (WOTUS) rule and regulation that regulates 97 percent of Iowa’s land in a new way. It really didn’t bring the stakeholders of Iowa’s agriculture, construction, builders, municipalities at the county and local level to really have a say in how would this affect what we do here at home.”

According to the EPA, more than 1 million public comments were received on WOTUS, running to more than 7,700 pages, and more than 400 meetings were held with stakeholders across the country. The EPA and the U.S. Army Corps of Engineers, which co-wrote the rule, “also utilized the latest science, including a report summarizing more than 1,200 peer-reviewed, published scientific studies which showed that small streams and wetlands play an integral role in the health of larger downstream water bodies.”

In the words of the EPA, the new WOTUS rule “ensures that waters protected under the Clean Water Act are more precisely defined, more predictably determined and easier for businesses and industry to understand.” The rule “does not protect any new types of waters,” nor does it “regulate most ditches, apply to groundwater, create any new permitting requirements for agriculture or address land use or private property rights.”

Nevertheless, “I opposed that rule,” Young said Saturday. “It could really change the way we do things here in Iowa and all across the country.”

Like Young and Grassley, former House Speaker John Boehner also opposed the new WOTUS rule. He said at the time of the Obama administration’s announcement, “The administration’s decree to unilaterally expand federal authority is a raw and tyrannical power grab that will crush jobs.” He said WOTUS “is being shoved down the throats of hardworking people with no input, and places landowners, small businesses, farmers and manufacturers on the road to a regulatory and economic hell.”

Boehner’s opinion of WOTUS appears to have agreed in all essentials with Grassley’s. Iowa’s senior senator said Congress “needs to apply the brakes when an unelected bureaucracy rams through regulations that do not reflect the consent of the governed or uphold longstanding constitutional principles that guarantee the states’ role in our federal system and individual rights regarding private property.”

The milder tenor of Young’s remarks in the basement of the Hotel Pattee still suggested he views WOTUS as Grassley and Boehner do, not as a scientific effort by the EPA to ensure the public a clean water supply by preventing pollution at its sources — in streams, creeks and wetlands — but as an executive agency’s power play for extending the reach of its bureaucratic empire into every wheel rut and barnyard puddle in Iowa.

“We need to keep them (the EPA) in check,” Young said, apparently stopping short of joining Iowa lawmakers Sen. Joni Ernst and Rep. Steve King in calling for the outright abolition of the federal agency.

Ray Harden of Perry, a commissioner on the Dallas County Soil and Water Conservation District, asked Young what he meant when he spoke of checking the power of the EPA. 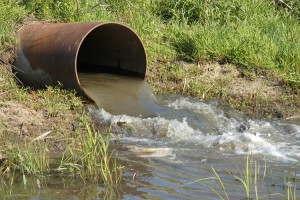 “Do you mean the government should allow industrial agriculture to continue to pollute the streams with nitrogen, phosphorus and hog manure and do little or nothing to stop the pollution?” Harden said.

“Farmers are not purposely dumping these chemicals, fertilizers into their waters,” Young said. “They’re coming up with the best practices, and they’re the best stewards of the land. Their livelihood depends on it for the next generation and the next generation. So they want get it right.”

While Harden agreed farmers might want to get it right, he said they often seem in fact to get it wrong. He noted that Iowa has lost half its topsoil in the 150 years since European settlement, that the 2015 rains washed away an average of 20 tons of topsoil per acre in Iowa, that many Iowa farm fields now have as little as 1 percent soil organic matter, that Iowa has more than 700 impaired waterways and many are carrying record high levels of nitrogen and phosphorus, that 2015 saw a record number of Iowa beaches closed to recreation due to bacterial contamination and toxic algae blooms.

“We all want clean water,” Young said noncontroversially. But “rules and regulations” are not the way to improve Iowa’s water quality, he said, whether that means making mandatory the conservation practices that are now voluntary under the Iowa Nutrient Reduction Strategy or by countenancing the WOTUS “land grab,” a term he said is used “not only by me but by others, especially those who own this land and who are worried the EPA has too much control and a lack of understanding about what goes on here in Iowa.”

Young said he prizes the liberties and maintains the rights of Iowans.

“I hear a lot from folks all across the district who worry about whether their Constitutional rights and liberties are being protected,” he said. He did not mention any farmer’s tears or the faces of confined livestock, but his feelings on this issue are probably grounded in human-scale realities.

According to a 2015 study by Iowa State University, the finance, insurance and real estate industries account for 21.5 percent of Iowa’s gross domestic product, compared with 7.4 percent from agriculture and natural resources. These business interests were also the biggest contributors to Young’s election campaign, as they are for many politicians in the state, such as Grassley, Ernst, King and Iowa Governor Terry E. Branstad.

Political leadership on the issue of Iowa’s water quality will eventually emerge. Popular attitudes toward the Outdoor Recreation Trust Fund or the Des Moines Water Works lawsuit make the event inevitable. If Young’s compassionate conservatism is matched by a knack for political triangulation, he could be the first to break rank and stake out a position more in line with the health and welfare of the majority of Iowans.