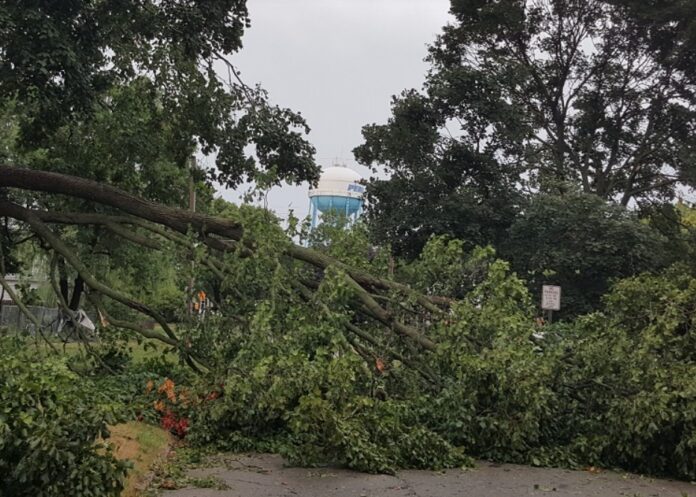 It was at about this time last year when the derecho wind storm ravaged Perry and lay waste to a wide swathe of central Iowa.

Thankfully, no injuries were reported, but trees were split and power lines downed by the 90 mph winds, leaving many people without electricity for days and causing damage that is in some cases still under repair.

The Gamble Block at 1203 Second St. suffered extensive damage to its roof and southwest upper corner in the devastating derecho. Demolition of a portion of the third story preceded the restoration, which is ongoing and has closed one block of Warford Street for two months.

The derecho winds blew out the large plate-glass windows of the Harbach building at 1108 Second St., the onetime home of Woolworth’s department store and later Spurgeon’s womenswear store. The owners of the property recently announced plans to install replacement windows and siding on the Second Street storefront.

A portion of the roof was torn off the new home of TCB Corporate Wearables in the Perry Industrial Park but in the year since, the sportswear maker came back stronger with a repaired roof and a new addition to the former spec building.

Perry-area farmers suffered an estimated $9.3 million in damaged crops, but this year’s yield promises to be a barn buster.

The resilience of Perry’s residents — from householders to shopkeepers to industrialists — was tested by the high winds, and we withstood the storm. Scars remain to mark the catastrophic weather event, which we pray does not become a regular feature of the altered climate of the Great Plains.