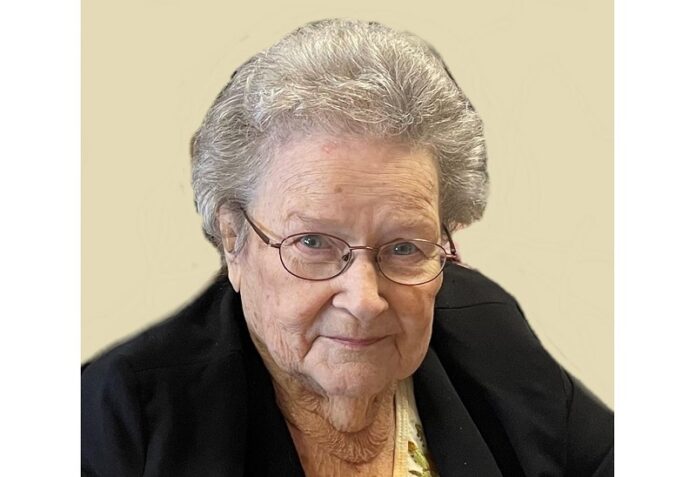 Patricia or “Pat” was born Dec. 10, 1931, the daughter of Richard and Opal (Bever) Daugherty in rural Earlham, Iowa. Growing up, her parents farmed in the Earlham, Perry and Woodward areas.

She graduated from Woodward High School in 1949.

On Dec. 31 of that year, she married the neighbor boy, Robert (Bob) D. Siglin, at her parent’s farm home near Woodward. To this union four children were born.

Pat and Bob lived and farmed together their entire married lives, which included two years on a family farm in rural Earlham provided by her Great Aunt and Uncle Bloomquist. They moved back to rural Woodward and purchased land in the Des Moines River Valley.

In the fall 1967, that farm was purchased by the U.S. Army Corps of Engineers as flood control for the Saylorville Lake project. Pat and Bob then purchased and moved to a farm north of Minburn and continued their farming operation until retiring in 1988.

In retirement Pat and Bob enjoyed wintering in Florida and Arizona and in 1997 became fulltime residents of Queen Valley, Arizona, where they made many longtime friends. Pat was active in the quilting club there and made many beautiful quilts for friends and family while enjoying the warm, dry climate.

In 2011 they decided it was time to be closer to family and returned to Perry, where they remained until Bob’s passing March 31, 2018. Pat then lived at Spring Valley Retirement Community until her death.

For most of her life, Pat had a love for horses, dogs and farm animals. Pat was a “tom-boy” growing up, and that trait benefited her the rest of her life, as she would tell you that she could run the farm equipment as well as Bob.

Pat had many talents and interests, and almost everything Pat attempted in her life was a success, from winning the women’s Nail Driving Contests at the Minburn Fourth of July games to training her dogs and ponies. She would harness her ponies up to the cart and participate in local parades. She always managed to include her grandchildren in those fun activities.

She taught herself to cook and bake and entered many pie and baking contests. She enjoyed her flower gardens and entered many floral arrangements at the county and state fair along with her baking items. She competed in tractor-pull contests with their IH 560 and was a 4-H leader for local clubs.

Pat was active in the Minburn Legion Auxiliary Post 99 and participated in women’s and mixed bowling leagues with Bob for many years in Madrid, Des Moines and Perry. Her Irish traits came through in her ability to talk to anyone, her stubbornness and her quick tongue.

Memorials may be directed to the Minburn Legion Auxiliary Post 99 or the Washington Township School Foundation in Pat’s name. They may be sent to Murdock Funeral Home at 1420 Warford St. in Perry. Online condolences may be left at murdockfuneralhome.net.