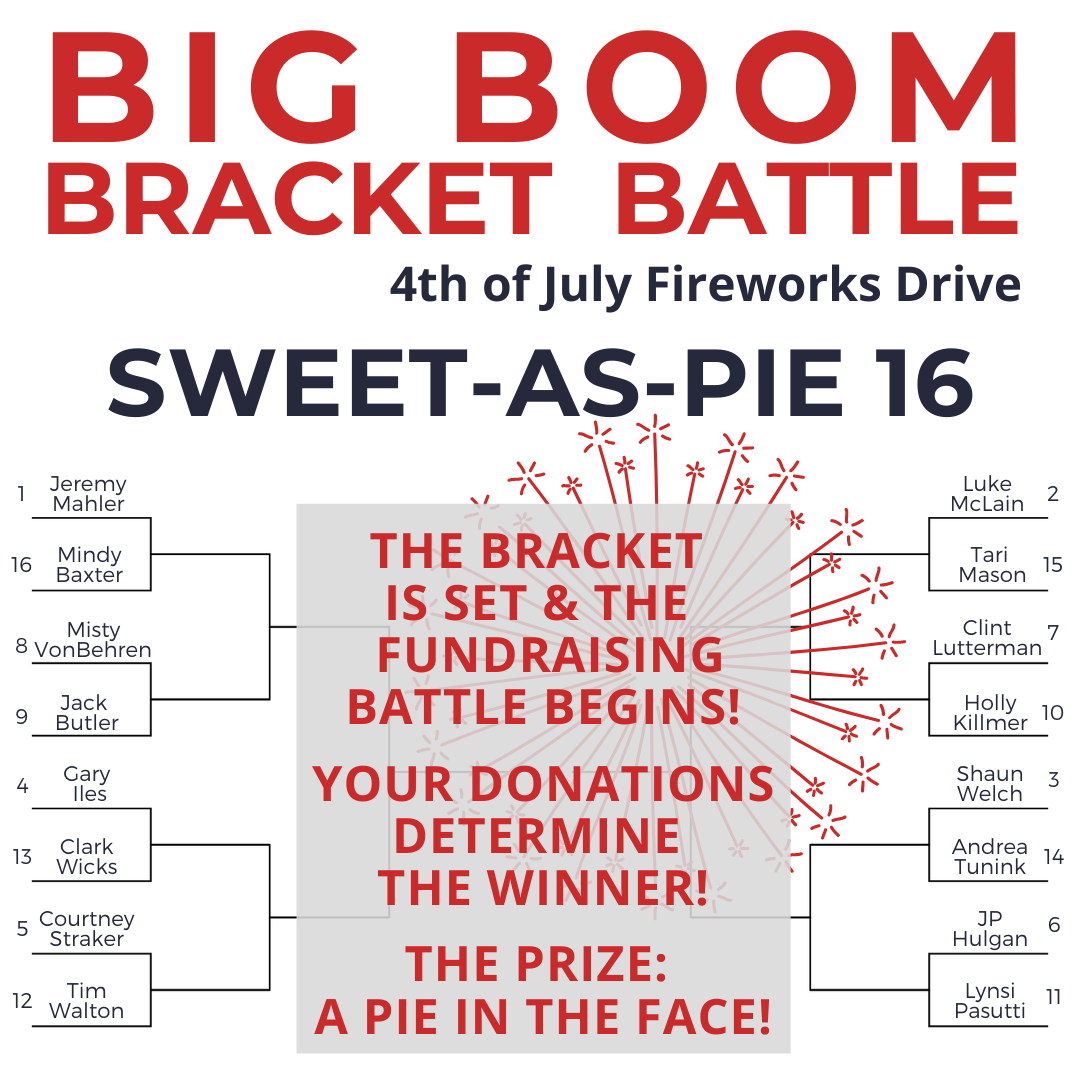 The Perry Chamber of Commerce received a total of 55 nominations from the community for the Big Boom Bracket Battle and of those, 37 nominees said ‘yes’ to the challenge, willing to get a pie in the face for the sake of fundraising for the fireworks during Perry’s Fourth of July Celebration.

“It may seem a bit early to be focusing on summer events when we aren’t even officially into spring yet,” says Lynsi Pasutti, executive director of the Perry Chamber of Commerce, “but with such a significant fundraising goal each year, it is always a challenge and down to the wire. We had been looking for ways to get things started sooner, and the idea for a bracket-style contest in March came up within the Chamber Ambassadors group.”

Last year’s Big Boom Bracket Battle resulted in two individuals – J. P. Hulgan and Eddie Diaz – getting a pie in the face due to a tie, and the initiative brought in about half of the total dollars raised for the fireworks display. While Diaz declined the nomination this year, Hulgan was among those in the Elimination Round seeking votes on Facebook to make it into this year’s bracket. He along with the 36 others brought in more than 6,000 combined votes in the process.

“With so many nominations this year, we decided to expand the contest to include an additional round of head-to-head match-ups,” explains Pasutti, “so instead of eight individuals in the bracket, we will start with sixteen. It will be fun to also have a wider representation of our community in the contest – from educators and city workers, to business owners and community leaders – all willing and definitely worthy of getting a pie in the face! The community really showed some enthusiasm in the Elimination Round with more than 6,000 votes on Facebook over the past week, so we will see how that translates into dollars moving forward!”

The Sweet-as-Pie 16 was announced Monday and the bracket of match-ups has been set based on ranking of votes in the Elimination Round:

Advancement in the Big Boom Bracket Battle is based on monetary donations from the community. Online donations can be submitted on the Perry Chamber of Commerce website, and in-person donations will be collected at the McCreary Center at 1800 Pattee St. and Ben’s Five & Dime at 1221 Second St. Donations may also be mailed to the Perry Chamber of Commerce at P.O. Box 472, Perry, IA 50220.

“The ultimate goal will be to make a dent in our overall fundraising goal of $12,500 and to have a little fun while we’re at it,” Pasutti adds. “Other initiatives will take place throughout the spring, but this will be our official kick-off for this year’s Fireworks Drive.”

The Chamber wishes to thank all those who participated in the Elimination Round, including those who submitted nominations, those who accepted nominations with the chance of getting a pie in the face and those who voted.

Lynsi Pasutti is the Perry Chamber of Commerce executive director.