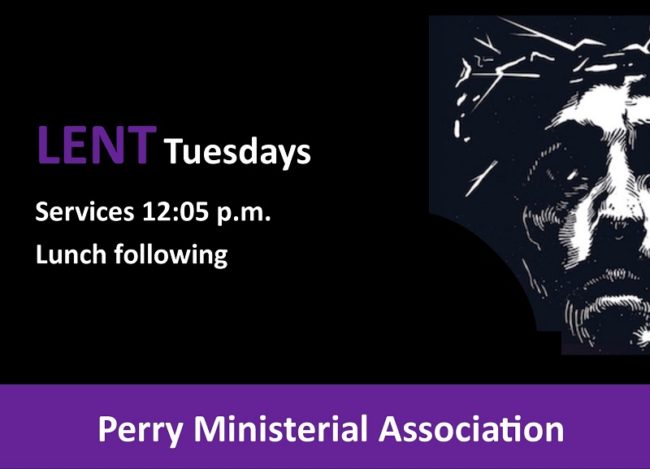 The Perry Ministerial Association (PMA) celebrated a community Ash Wednesday service at St. Patrick’s Catholic Church Wednesday at noon to mark the start of the Lenten season of prayer, fasting and alms giving.

The PMA will host Lenten services each Tuesday beginning at 12:05 p.m., with a luncheon to follow. The service schedule is as follows:

The first Ash Wednesday reading was from Joel 2:12-18:

Even now, says the Lord, return to me with your whole heart, with fasting, and weeping, and mourning;
Rend your hearts, not your garments, and return to the Lord, your God. For gracious and merciful is he, slow to anger, rich in kindness, and relenting in punishment.
Perhaps he will again relent and leave behind him a blessing, Offerings and libations for the Lord, your God.
Blow the trumpet in Zion! proclaim a fast, call an assembly;
Gather the people, notify the congregation; Assemble the elders, gather the children and the infants at the breast; Let the bridegroom quit his room and the bride her chamber.
Between the porch and the altar let the priests, the ministers of the Lord, weep, And say, “Spare, O Lord, your people, and make not your heritage a reproach, with the nations ruling over them! Why should they say among the peoples, ‘Where is their God?’”
Then the Lord was stirred to concern for his land and took pity on his people.

Brothers and sisters: We are ambassadors for Christ, as if God were appealing through us. We implore you on behalf of Christ, be reconciled to God.
For our sake he made him to be sin who did not know sin, so that we might become the righteousness of God in him.
Working together, then, we appeal to you not to receive the grace of God in vain.
For he says: In an acceptable time I heard you, and on the day of salvation I helped you. Behold, now is a very acceptable time; behold, now is the day of salvation.

An offering will be received as part of each worship service. The offering helps the work of the PMA’s Good Samaritan Fund, which aids individuals and families in the community in crisis situations.