Residents of Perry received a seven-page letter from the Perry City Hall this week, with detailed instructions on the new procedures for garbage collection and recycling disposal that take effect Aug. 6.

On the garbage side, the letter explains in English and in Spanish that Perry residents will have a 95-gallon container delivered to their homes during the week of July 30. There is no cost to Perry residents for the new bins.

Do not place garbage bins in the street, the city letter said.

The letter also includes a list of helpful tips-consejos utiles that covers the proper filling and placement of garbage bins. Bins should not be overfilled but should contain only so much that the lid still closes.

Bins require four feet of clearance on each side in order for the truck to grab the bin with its automated arm. Do not place bins behind or near parked vehicles, next to trees and so forth, but allow four feet on both sides of the bin.

Perry residents will continue to pay $19 a month for weekly garbage collection and seasonal yard waste pickup. Residents who find the 95-galloon bin too unwieldy may switch to a 65-gallon bin.

On the recycling side, curbside collection will cease, and residents will now haul their recyclables to one of three sites where roll-off dumpsters will be provided:

Residents are encouraged to read the letters in English and Spanish for more details on the new garbage and recycling arrangements.

“We ask that you please have patience with us on this process,” the English version of the Perry City Hall letter said. “This is new for everyone, including our employees, but we know it will work out great in the end. Feel free to call city hall with any quiestions you may have at 515-465-2481.”

The $400,000 startup cost for the new waste services will be paid with Local Option Sales Tax revenues, according to city authroities, including $152,000 for the rolling garbage bins, one for each of Perry’s 2,500 households, $245,000 for the new automated garbage truck and $158,000 for new commercial truck with cart tippers and winch.

The trade-in value of about $162,000 for three of the city’s current garbage trucks also helps offset the startup cost. 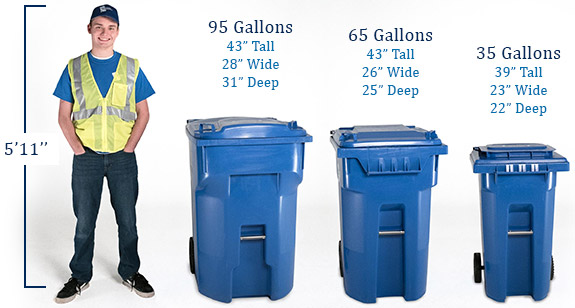