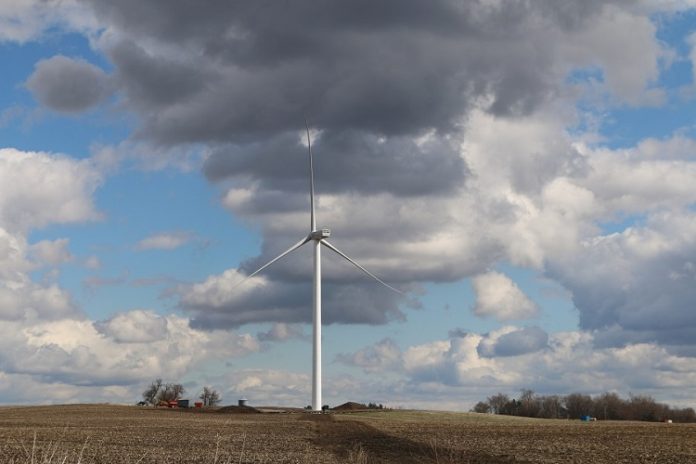 The Perry skyline has been dominated for many years by the city’s water tower, but three tall strangers have arisen on the south side of town, dwarfing the freshly painted tower: the wind turbines of Marshall Wind Energy.

Erected last winter, the 447-foot giants are visible for miles. But why are the blades not turning and supplying Perry’s residents with sustainable green energy?

“We’re waiting on Alliant to hook us up to the substation,” said Kurtis Sherer of Norwalk, chairman of Goodwind Energy and a partner in Marshall Wind Energy. He said he expects the connection to be made in June or July.

Sherer brought the applications for conditional-use permits before the Perry Zoning Board of Adjustment in February 2015 after objections raised before the Dallas County Planning and Zoning Commission made approval for building on county land look unlikely.

Marshall Wind found a much more willing partner in the city of Perry. The city promptly annexed last April the land Marshall Wind wanted for its turbines, and the Perry Zoning Board of Adjustment soon approved the permits in spite of split votes on the board.

Landowners along K Avenue challenged the zoning board’s approval of the permits and sought a restraining order to stop construction of the turbines, but they lost their case. The construction began in December and was completed by the first of 2016, but the turbines have yet to turn.

“I don’t want to get into addressing things that are really nobody’s business, the way things have been up there in the past,” he said. “I’ll answer the question about when things will start running and leave it at that.”

In spite of the local opposition the project encountered in Perry, Sherer said Marshall Wind Energy has plenty of work in Iowa.

“We’ve got five projects that we’re hooking up, so we’re keeping busy,” he said.

When finished, the new Alliant Energy substation will consolidate into one unit Perry’s seven smaller substations and will double the town’s capacity from 12.5 kilovolts to 25 kilovolts, according to Alliant Energy Key Account Manager Annette Renaud, who first briefed the Perry City Council on the $15 million project a year ago.

The new substation is located just south of Tyson Fresh Meats at Iowa Highway 141 and I Court. Its construction required an extensive rewiring of Perry’s electricity infrastructure, including the placement of 889 new power poles and 16 miles of new wire.