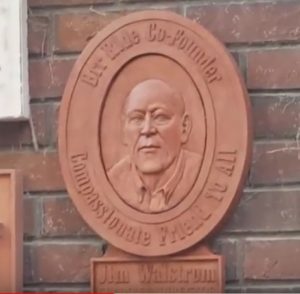 The pantheon of Perry’s notable daughters and sons gained a new face Wednesday evening when the Perry Historic Preservation Commission and Hometown Heritage unveiled a bas relief bust of BRR Ride co-founder and “compassionate friend to all” Jim Walstrom.

About 150 people filled Soumas Court and spilled onto Willis Avenue in downtown Perry for the 5 p.m. unveiling, the size of the gathering a testament to the love and esteem Walstrom has inspired in the hearts of his fellow townspeople since moving to Perry in 1970 with his wife, Julie Mills Walstrom.

Joining Jim and Julie Walstrom at the celebration was Jim’s 98-year-old mother, Eleanor Walstrom, a widow of many years who recently moved to Perry from Manson, Iowa, where Jim was born. Jim and Julie’s son, Matthew Walstrom, was also on hand.

Jane Johnson of Chicago and Katie Averill of Des Moines, sisters to Julie Walstrom, filled out the family retinue and were seconded by an immense number of friends and well wishers touched over the years by Jim Walstrom’s many kindnesses.

Perry Mayor Jay Pattee, a longtime friend of the Walstroms, delivered heartfelt remarks prior to the unveiling, noting Walstrom’s penchant for storytelling with allusions to tales of “a billiard-room brawl” and “a bunch of raucous old guys on a bus to a Twins game.”

Walstrom’s gifts as an aficionado of junk were also reviewed by the mayor. The Newton sculptor Rick Stewart described his pleasure in becoming friends with the Walstroms and having Jim sit for his bas relief. Stewart has created a number of the witnesses on the Perry wall.

Walstrom’s likeness joins 22 other witnesses gracing the southwest wall of Soumas Court. The ceramic plaques were originally conceived in the late 1990s when Clark and Roberta Green Ahmanson saw a similar wall in Murphys, Calif., called the Wall of Comparative Ovations. Clark said they derived the name — Wall of Witnesses — from a verse in the Bible’s epistle to the Hebrews:

Wherefore seeing we also are compassed about with so great a cloud of witnesses, let us lay aside every weight, and the sin which doth so easily beset us, and let us run with patience the race that is set before us.

Perry’s plaques were designed by David Dahlquist of Dahlquist Clayworks of Des Moines, who also designed the floral paving stones in Soumas Court.