Students from Perry High School will join their peers from about 250 other Iowa high schools Tuesday, Jan. 26 in the Iowa Youth Straw Poll, sponsored by Iowa Secretary of State Paul Pate’s office. The poll follows November’s Iowa Youth Caucus and aims to engage soon-to-be voters in a hands-on learning experience that will inspire them to participate in civics in their community. 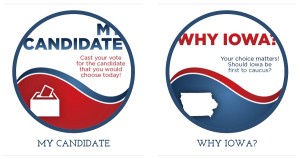 Iowa Department of Education Director Ryan Wise said students will “better understand the principles of our democracy when they actively participate. The Iowa Youth Straw Poll is an opportunity to introduce students to the democratic process and to help them build the knowledge and skills to be active, engaged citizens.”

Pate’s office worked with the Republican Party of Iowa and Iowa Democratic Party to organize the first statewide, bipartisan Iowa Youth Caucus Nov. 19, with 22 Iowa counties participating. Iowa high school and middle school students took part in both a Republican and Democratic mock caucus and cast votes for the presidential candidate of their choice for both parties.

Vote getting among the Republican candidates was led by Dr. Ben Carson:

Kasich, Jindal, Graham and Pataki have since dropped out of the race for the Republican Party nomination.

A full list of the schools participating in the Jan. 26 Iowa Youth Presidential Straw Poll can be found on the Iowa Secretary of State website.