This time of year brings a lot of joys and also some sorrows. No, I am not talking about Christmas. For me it is the end of dinner season, which officially came to an end at the last Bouton Breakfast on Dec. 5.

Many of you know that I like to attend area dinners. There are various ice cream socials, fish fries, breakfasts and other food-related events throughout the year that I enjoy. But my favorite dinners are the ones that usually start in the fall and continue mostly up to Thanksgiving time.

ThePerryNews.com Sports Editor Jeff Webster always claims that Dan Haymond and I like to go to free-will donation events so we can give $1 and eat to our hearts’ content. Part of this comment is false, but we do eat to our hearts’ content. Jeff only goes to the Yale United Methodist Thanksgiving Dinner, which traditionally is held the first part of November each year.

I got started going to dinners because of Dan Haymond. He used to keep track of all of the area dinners hosted by United Methodist Churches and then drag me along to these. Now he also drags his grandson to many of these dinners.

For some reason, Dan was focused on only United Methodist Churches. Once I caught the dinner bug, I talked him into going to any and every type of food event, whether it be church related, which most are, or otherwise.

I do not know how many dinners I have attended over the years. Dan used to keep track of when the dinners were held, mostly by watching the community bulletin board at the local Hy-Vee. Unfortunately, Hy-Vee took this bulletin board down a number of years ago. What a great loss this was to area communication.

Now we use local publications and computer websites such as ThePerryNews.com, a great aid in finding out where these dinners are. At the sites of these dinners, there are also usually homemade posters advertising other area dinners.

My fall dinner season officially started Saturday, Sept. 26 when Washington Township School held their pork loin dinner. There was also a dinner at Avondale Church near Fontanelle, but it seemed too far away for me.

On Oct. 3 was the Booneville United Methodist Church annual chicken noodle dinner. In 2014, Dan had some conflict that made us late, and they had sold out by the time we got there. I still left a donation. This year we were early and ate!

After church Oct. 4, Dan and I went along with Duane Griffin to the ham ball dinner hosted by the Christian Church in Guthrie Center. They always draw a large attendance but always have enough. The bad part is on this same Sunday there is always a chicken dinner hosted by St. Cecilia Catholic Church in Panora. I just cannot eat that much and must drive by it coming and going.

On Oct. 11 was a ham ball dinner at the Granger United Methodist Church. Have you ever noticed that there seems to be an information black out in Perry for anything that happens east of Bouton? I cannot remember how I found out about this dinner.

The Bagley United Methodist Church held their annual Columbus Day chicken noodle dinner Oct. 12. Duane Griffin usually attends this dinner, too. One year Duane and Dan ate so much I do not know how they made it back to the car. I like the advertising in town for this event. They put up a black board in the middle of an intersection and write, “Methodist Church Chicken Noodle Dinner Tonite”. That is Americana!

I attended the harvest dinner at the First Presbyterian Church in Grimes for the first time Oct. 18. They had a traditional turkey dinner and served it family style, which was unusual. It was a well-run operation, and I really liked the giblet gravy.

Unfortunately, I could not make the ham ball dinner at New Hope United Methodist Church in Des Moines, which went on at the same time.

The following Tuesday, Dan and I headed to the Guthrie Center United Methodist Church for their pork loin dinner. I once said that for Sunday dinner in heaven, they must serve this pork loin.

The next night was the Linden United Methodist Church fall dinner. They serve Hunter’s steak and a lot of other things, including harvest beets that you do not see anywhere else.

On Saturday, Oct. 24 we headed to the Perry Trinity Lutheran for their harvest dinner. They served turkey and ham, which is always good. The have good music, too. I also bought some cookies.

The next Saturday we headed to the Minburn United Methodist Church for their annual chicken and noodle dinner. As always it was great.

That following Wednesday would have been the date for the annual Yale United Methodist Church Thanksgiving dinner. This is the one that Jeff attends, but it was not held this year. They have the biggest spread of anywhere that I have ever seen. I am sure that it takes a lot of work to get this pulled off. Hopefully, next year it can revive.

The Dexter United Methodist Church also usually hosts a dinner at this time of year, but I did not see any information for it.

On Friday, Nov. 6, Duane and I headed to Adel for the Faith Lutheran Church annual Thanksgiving dinner, which is always very elegant. Dan missed that one. He must have been working out of state.

That evening there was a ham ball dinner held at St. Paul Lutheran Church in Winterset. I could not make it because I went to the Oak Ridge Boys Concert in Jefferson.

The St. Patrick’s Church Knights of Columbus hosted their annual Thanksgiving dinner prepared by Molly Rowe Nov. 8. Molly does a great job with this. I think there was a dinner that same day hosted by Zion Lutheran Church of Ogden. I could not make it to both dinners.

On the 21st Dan drove us out to Penn Center United Methodist Church south west of Earlham for their annual soup dinner. They had a wide selection of soups. I tried three of them. It is sure dark in the middle of nowhere at night. I also got some peanut butter cookies with chocolate stars in the middle.

After that things started to wind down. On Wednesday, Nov. 25 I attended the Edge Youth Group’s annual Before-the-Turkey soup supper. This is their 10th year, and I think I have attended each year.

To end everything was the last Bouton breakfast Saturday, Nov. 5, the last eating event until April.

Believe it or not, I did not gain any weight. Moderation paid off. All of the dinners were great, and they all had something unique about them.

Although I am sad about the end of what I call “Dinner Season,” something that I saw made me happy again. Shawn Kenney coined the name for this individual: Jovial Jeff the Jolly Christmas Elf, who made his first appearance at the High School Varsity Basketball games last weekend.

I always know that when Jovial Jeff appears, Christmas is around the corner, and Santa will be bringing us all some Christmas joy.

Have a Merry Christmas and a Happy New Year! 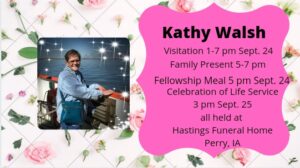