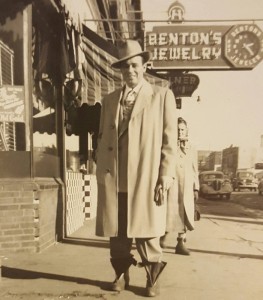 Thomas Edward Young was many things — a native Iowan, a self-taught pilot, a man with a very high IQ, a businessman, a bear-wrestler, a Perry junkyard owner, a fellow traveler with gangsters, an escape artist and a family man.

Highlights from Young’s busy life will themselves be brought to life Sunday, April 10 at 1:30 pm. in a lecture by Juli Probasco-Sowers, lingtime Perry-area journalist, who is writing an historical novel based on Young’s colorful life.

Probasco Sowers’ presentation is part of the latest exhibition in the Carnegie Library Museum in Perry. The show is called, “Nefarious Perry” and features newspaper clippings and several artifacts from other noteworthy stories of Perry’s colorful criminal history. The exhibit is open now at the Carnegie and runs through May 23.

Young is perhaps most notorious for making the FBI’s 10 Most Wanted list during a crime spree in 1951 and 1952 and then spending 10 years as a prisoner on Alcatraz Island in the San Francisco Bay. He was one of the last 27 prisoners to walk out of the infamous prison when it closed in 1963.

Probasco Sowers has combed through FBI records and prison records and conducted interviews with family members, which together give a glimpse into Young’s life on his journey from the rugged and impoverished coal camps in Dallas County where he grew up, through life on the run, as an Alcatraz inmate and his final homecoming and fresh start.

“His story is almost unbelievable,” Probasco Sowers said. “Some parts of his journey we just don’t know, and that’s where the book moves from creative non-fiction to the level of a novel.”

Probasco-Sowers said she is looking forward to sharing the wealth of information she has gathered on Young over the last four years for a historical novel she is writing.