When Memorial Day nears, my thoughts are always drawn to Violet Hill Cemetery. I wonder what it was like for my grandparents that first time after World War II.

Clabe and Leora Wilson had bought an acreage in late 1944, unable to farm for their landlord at Minburn after all five sons had left to serve. The house sits on the first corner south of today’s Forest Park Museum, a mile south of Perry.

When they moved there, one son (Dale) was missing in action in New Guinea. The other terrible telegrams were delivered at the Perry acreage by their mailman, Oscar Daniels.

Another son was MIA in Europe. Then the worst one. Their youngest had been killed when his plane’s engine threw a rod and exploded — the day the second atomic bomb was dropped. The war was nearly over.

Twenty-year-old Junior Wilson was the first in the family to be buried in Violet Hill Cemetery. Months after the war, the remains of Daniel Wilson, age 21, the son missing in Europe, had been located. And the one missing in New Guinea, who has never been found, was given an official death date. Dale, age 22.

So their grieving parents had another stone made, having it installed to the north of Junior’s, to remember Dale and Danny.

Grandma Leora was our own poppy lady. When I was a child, I’d ride along when Mom and Aunt Darlene drove to Guthrie Center, with their pails of spring flowers, to collect Grandma Leora and her pail of flowers. Before starting out, Grandma made sure we each had a crepe paper poppy to wear.

I didn’t know why those poppies were important or that Grandma was a well-known poppy lady in Guthrie Center. She had offered crepe paper poppies for decades in Guthrie Center for donations to go to wounded veterans.

Dr. McCrea’s poem about red poppies among dead soldiers in Flanders Field became the symbol on both sides of the Atlantic for fallen servicemen.

Grandma Leora had a compelling and terrible connection with those poppies, having lost three of her own young pilot sons during World War II.

Before leaving Guthrie Center, we’d stop at the cemetery to remember Grandma’s parents and other relatives with flowers, then we’d head east to Perry, our destination.

Grandma and my mother and her sister rarely talked about the sorrow this rite represented. I had head knowledge of the loss of Mom’s younger brothers but few details. At home, their pictures — in their pilots’ uniforms — were silent watchers.

Taking flowers to the cemetery was a May tradition for the women of my Motherline. It also included having lunch in Perry with Grandma, Aunt Darlene, Mom and my sis Gloria. And shopping. As a child, I looked forward to it.

I didn’t realize until after Grandma’s death and got to read all the family letters — and terrible telegrams — that Dale and Danny Wilson aren’t buried at Perry. Only Junior is buried there. His P-40 exploded in training the day the second atomic bomb was dropped.

Dale and Danny were both still missing at the end of the war. Danny’s grave was located later, and he is now buried in France. Dale and his crew in New Guinea have never been found.

Many American families don’t even visit a cemetery for Memorial Day, and have no idea that it is for remembering the sacrifices of sons and brothers and fathers who were lost in the struggle to liberate other countries. Countries devastated by tyranny and war.

Europeans do a better job than we do of remembering and appreciating all these American losses. After all, they live where those wars were fought to rescue their homeland from the Nazis. Thousands of those young Americans lie in cemeteries overseas.

Memorial Day ceremonies will be held this weekend in 26 American military cemeteries around the globe, with nearly 125,00 graves — including that of Danny Wilson, buried at the Lorraine American Cemetery in eastern France in Plot D, Row 5, Grave 7.

And panels with names of over 94,000 still missing in action, lost or buried at sea — including Dale Wilson, who was Aunt Darlene’s twin, who is remembered on the Wall of the Missing at the Manila American Cemetery in the Philippines.

We need to make sure this part of history and those young men are never forgotten. At least buy a poppy — for remembrance.

Joy Neal Kidney is the author of “Leora’s Letters: The Story of Love and Loss for an Iowa Family During World War II,” which is the story of the Wilson brothers featured on the Dallas County Freedom Rock in Minburn. 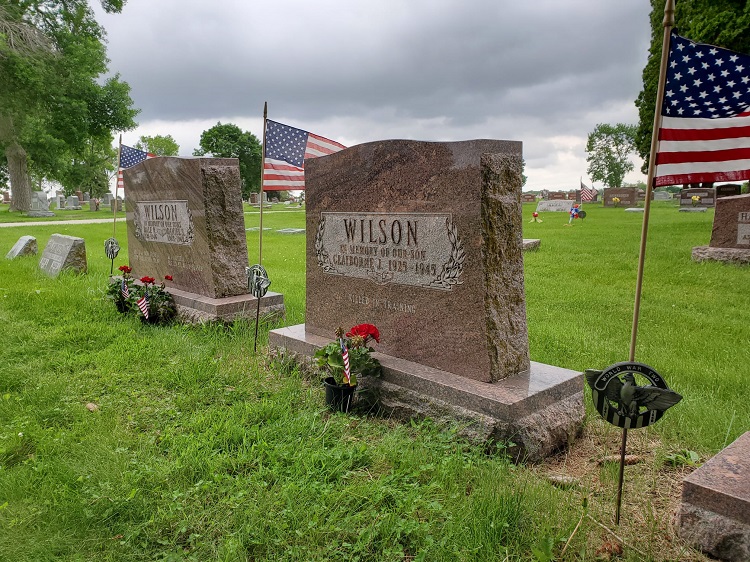