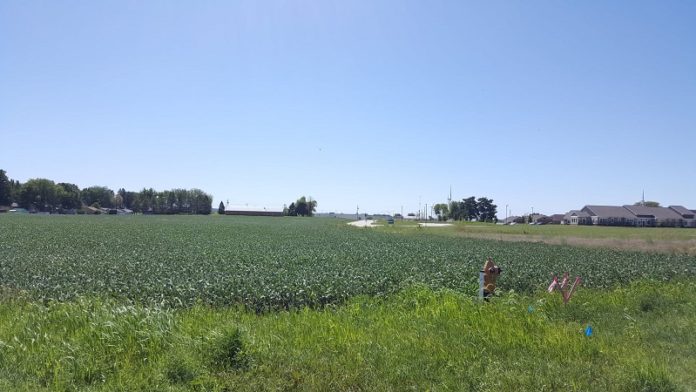 About 12 acres east of 28th Street and between Willis Avenue and McKinley Street might soon be developed into a residential mixture of apartment houses, duplexes and single-family houses if the proposal put before the Perry Planning and Zoning Commission (P&Z) at its Aug. 13 meeting bears fruit.

Now a bean field, the land lies across 28th Street from the Rowley Masonic Community and north of the Otley Masonic Lodge 299. Dallas County land speculator LeMar Koethe purchased the 11.78-acre tract in November 2018 from the Herman L. Rowley Memorial Trust for $100,000.

“They’ve got the one apartment building almost completed,” Wetzler said, “and that’s all they can do, technically, with a preliminary plat. Now they have about 30 days to submit a final plat, and then they can start construction on the duplexes or the single-family or the other apartment complex that they have planned for.”

She said the Webster City Council approved $2 million in tax increment financing (TIF) for the project as an incentive for the developer. The property tax rebate will help finance the construction of streets and utility infrastructure for the development.

“It was a major subdivision with total streets and infrastructure and everything,” Wetzler said. “We felt the PUD was necessary when you start talking mixed uses. We wanted to have a PUD in place so we know exactly what’s transpiring.”

Green Stream Homes’ Carroll PUD is at an earlier stage of development, and construction has not begun. The 8.63-acre project on the city’s east side would contain two 30-unit, three-story, market-rate apartment houses and 16 duplexes, according to Carroll City Manager Mike Pogge-Weaver. He said the Carroll City Council offered the developer $600,000 in TIF incentive.

Perry Community and Economic Development Director Mike Fastenau said the P&Z Commission will learn more about Walters’ plans for the site in the next few months.

“I believe Dave puts together development deals,” Fastenau said. “That’s what he does, and that is still evolving here, too.”

Koethe the land baron also owns several other agricultural properties near the intersection of Willis Avenue and Iowa Highway 141.