I close my eyes.

I see the black.

The black becomes a palette.

I become one with the Picture.

I ride the Music.

No longer requiring or indulging in exotic alkaloids, I induced such a state of synesthesia while attending the Beatles Revival concert at La Post this last Saturday night. Most there had a good time dancing on their feet. I danced while seated.

To be sure, La Poste is one of the most exquisitely appointed music venues I’ve had the pleasure of being at for a very long time. It must be seen to be fully appreciated.

I was hungry on arrival, so I sprung for the pulled pork sandwich and pasta salad special River Valley Catering. The sandwich was great but the penne pasta was particularly divine.

While I enjoyed my time there, I must make a few comments.

It’s not as if I expected four middle aged dudes to perform decked out like the old Mop Tops or Sergeant Pepper guys. Still, I’d have thought a Beatles revival group would have put a little more effort into wardrobe than just jeans and Beatles T-shirts. 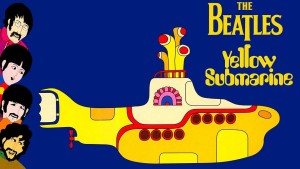 They also pointed out a plastic, 10-foot Yellow Submarine with the Fab Four smiling in four of the six portholes. The band suggested those interested could take selfies with the Beatles through the open holes. I thought this was a little cornball. I lie. I thought it was very cornball.

Musically speaking, they were competent musicians, but drummer Steve Gland and lead guitarist Kelly Evans were a league above the keyboard and bass player. I’m just guessing, but I’m thinking the bass is not the preferred instrument of Kevin Kerwin, the gent who played bass Saturday. His guitar playing was much more fluent and distinct than his bass playing.

He appeared to lack confidence a bit with his vocals, too.

Speaking of vocals, the harmonies were great. Gland was a particularly good vocalist. Frankly, his drumming was as good as any I’ve ever heard at any smaller venue in Iowa for the last 30 years.

Evans was no slouch either. His electric work was nice, but his acoustic playing was particularly good. I wish he would have sung lead more often than he did. He was very good and at least as good a singer as the drummer.

The gent playing the keyboards, Steve Bowder, did fine with his chosen instrument as well. I really liked the way he worked with the lead guitar in order to achieve a simulated sitar sound for “Norwegian Wood.” He had more confidence than bassist Kerwin with his vocals, but he seemed to struggle a bit.

He even hit a couple klinkers on a few songs, but I won’t pass judgement. I’d rather hear someone belt out a sour note or two trying to sing live than waste my time with a band reliant on auto-tune.

So the Come Together Band out of Omaha was less than perfect. Big deal.

They did a darn fine job keeping the folks dancing. They also earned my 10 bucks for doing “Norwegian Wood,” “Lucy in the Sky with Diamonds” and the entire second side of “Abbey Road,” and all those met my higher than average standards.

Pat Graney of Graney Entertainment might not have hit a grand slam with this gig, but he certainly knocked in a couple of RBIs. I’d trust Pat and the ladies at La Poste with my 10 dollars again in a heartbeat.

The gift of bird watching: The common grackle

Why you should care it is National Public Health Week

The gift of birdwatching: American woodcock