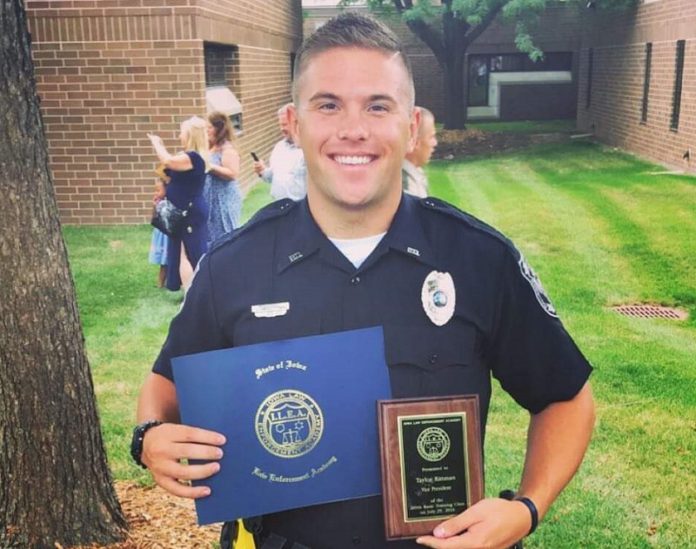 Rittman is a 2012 graduate of Ankeny High School. He attended Grand View University, earning a Bachelor of Science degree in criminal justice. His leadership skills appeared during his academy training when he was elected vice president of the 269th Basic Level I Training School at the Iowa Law Enforcement Academy.

Rittman plans to move to the Perry community Sept. 1. His parents, David and Renee Rittman of Ankeny, attended the graduation ceremonies in Johnston

“Obviously, this is a proud-parent moment,” David Rittman said, “but with the recent focus on police relations and officer fatalities, it’s also a bittersweet moment for us as parents.”

The recent sniper attack in Dallas, Texas, that killed five law enforcement officers has riveted the nation’s attention on issues of police-community relations. The Texas murders occurred at a Black Lives Matter protest rally, where complaints were voiced about systemic inequalities in the U.S. criminal justice system and the frequent killing of unarmed black men by police.

“It was an emotional day yesterday as I watched my son join a new family,” said Rittman, father of the newly minted policeman. He said he wrote a poem to express his feelings about his son’s setting forth on a career in law enforcement and in order to “remember what I felt as his mother and I pinned his Perry PD badge on his uniform.”

Rittman graciously gave the ThePerryNews.com permission to publish the poem here. It is entitled, “To the People of Perry…”

To the people of Perry…

I wish you had a son like mine…
So strong, so brave and true.
Today I give him to the world
To join the Ranks of Blue.

I wish you had a son like mine…
So then you’d know the pride,
Along with apprehension
And the fear I feel inside.

I wish you had a son like mine…
To know a different side
Of those charged with a watchful eye
To search where dangers hide.

I wish you had a son like mine…
You’d feel, the same as I,
That deep within his Kevlar vest
A servant’s heart resides.

I wish you had a son like mine…
Trained well and now prepared
To honor his commitment
And embrace what few men dare.

I wish you had a son like mine…
You’d honor and respect
The path he’s chosen in this life:
To serve you and protect.

I wish you had a son like mine…
You’d realize the phrase,
“Blue Lives Matter,” means much more
Than politics or race.

Today you gain a son. He’s mine…
We’ll share him for a while.
Please treat him well, as he will you.
Lord, keep him safe each mile.

The elder Rittman was eager to share details about his son, “in the hope,” he said, “that the community of Perry, the state of Iowa and the entire country might learn a bit more about the man behind the uniform he wears. With very few sad exceptions, the members of the law enforcement officer community, and certainly my son, hold respect for all people and are dedicated servants of the communities they serve and protect. While you’d expect some promotion by a proud father, the city of Perry is fortunate to have Taylor as both a new city employee and member of the community.”

Keep up with local news like this by becoming a $5-per-month donor to ThePerryNews.com. To get started, simply click the Paypal link below.