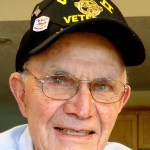 Robert (Bob) Thomas Bryan Jr., a lifelong farmer in the Dawson/Jamaica area, passed away peacefully on Monday, Feb. 2, 2015, surrounded by family. Bob was known for his wonderful grin, great kindness, numerous hobbies and, of course, his meticulous fields. He loved the land and always felt it was his job to leave a place better than he found it.

His hobbies included woodworking, beekeeping, canning, gardening, raising trout and catfish, pressing apple cider, gathering maple syrup, and restoring old tractors. Bob and his wife of 62 years, Nadene (1929-2013), turned their farm into a haven for kids, grandkids and wildlife and surrounded it with ponds, native flowers and prairie grasses.

They also traveled extensively and spent several years doing short-term work projects for Methodist churches in southern states. This group was aptly nicknamed NOMADS (numerous old Methodists avoiding deep snow) where dear friends from all over the country packed their trailers and headed south each winter.

Bob was born on Jan. 22, 1927 in Bouton, Iowa, to Robert Thomas and Marguerite Leone (Leaming) Bryan. His family moved to LaPorte City for a short time before moving to Dawson. Following graduation he joined the United States Navy at the age of 17. A few years later, he met the pretty little blonde love of his life, Nadene Marie Girton, on a double date set up by Bob’s sister, Pat, and Nadene’s brother, Darrel, who were engaged. Bob and Nadene were united in marriage on June 11, 1950 at the United Methodist Church in Magnolia, IA.