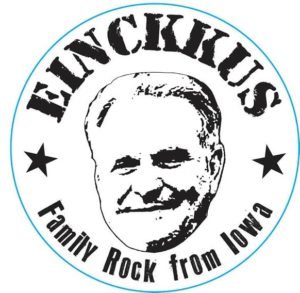 A huge crowd turned out to hear the pop-rock sounds of 45-year Perry favorites Rukkus at the Pattee Park bandstand Friday evening for the 2018 Friday Fest.

The band’s lineup varies from summer to summer, but the core members — lead singer Mark Einck of Perry, rhythm guitarist Jim Wuebker of Grimes and lead guitarist J. C. Wilson of Des Moines — have played together since seventh grade.

Wilson humorously renamed the band Einckkus for this year’s Friday Fest in honor of the several Einck children who joined the band for this show. Some of the dancing darlings in front of the stage might well have been the band members’ grandchildren as well.

“This is such a great turnout,” said one toe-tapping attendee. “Maybe they can start doing the Friday Fests once a month again like they used to.”

Half a dozen vendors served a variety of food and beverages to the festive folks.