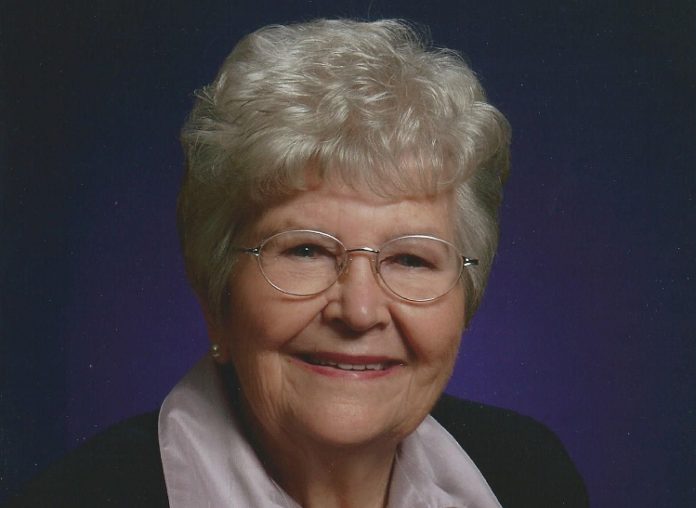 Ruth was born May 14, 1920, in northwest Big Horn County, Wyoming, the daughter of William George and Sylvia M. Griffen Hodson. She was second youngest of 13 children in this homesteading family.

She graduated from high school in Burlington, Wyoming, and was offered a scholarship to a business college.

She was married to Boyd H. Blattner in Wyoming. The couple later moved to Nebraska, where Boyd taught High School music. After several years in Nebraska, they moved to the family farm at Keota, Iowa, and farmed until they moved to Perry in 1981.

Ruth and Boyd spent 24 years wintering in Arizona and California until his death in 1998. They were married more than 60 years.

Ruth remained in her home in Perry until 2012 and then joined the Rowley Memorial Masonic Community.

She helped organize the Keota Senior Center. She worked in banks in Gibbon, Nebraska, Keota and Washington, Iowa.

She was a member of P.E.O. for 72 years and organized Chapter OK P.E.O in Perry.

One of her joys was making pulled butter mints, which she enjoyed giving to graduation parties, weddings and individuals. She also enjoyed gardening and crocheting.

She is survived by sons, John (Christine) of Panora, Jim (Carol) of Everson, Washington; three granddaughters, Kellie (Skip) of Chicago, Carrie (Bill) of St. Louis and LeeAnn of Seattle; four great-grandchildren; and many nieces and nephews.

She was preceded in death by her parents; husband, Boyd; two infants; and 12 siblings.

The family requests any cards and memorials to be sent to the Carris Family Funeral Home, 1721 Park St., Perry, Iowa 50220. Memorials will be given to P.E.O. Chapter OK. Online condolences may be sent at www.carrisfuneralhome.com.

A graveside service will be at the Keota Cemetery in Keota at a later date.