When Ali Gdid got home from his shift at the Tyson Fresh Meats factory a couple of weeks ago, he found his neighbor to the south, the McKee Auto Center, had built a fence so close to his garage on South Street that he could no longer pull in and out of it.

In fact, the McKee Auto Center fenced off all of South Street eastward from Third Street, closing a roadway that was open to vehicles for at least the last 40 years and possibly much longer.

The fence was erected in order to “enclose all of our customer parking for repairs,” said Jon McKee, manager of the RV department of the McKee Auto Center. “We’ve had vandalism through the years, so we want to help reduce that overall possibility of happening. On top of that, coaches that are back there, they can be anywhere between a thousand dollars and a million, so it’s in our best interest to go ahead to protect our customers’ investment.”

McKee said there have also been issues with theft, and four catalytic converters were recently stolen from RVs parked on their lot

The McKee Auto Center acquired the South Street property in December 2019 from Bill and Rhonda Olson of Perry, the heirs of Wilford and Winona Roberts, to whom Iowa Gov. Robert D. Ray deeded the property with letters of patent in 1978. 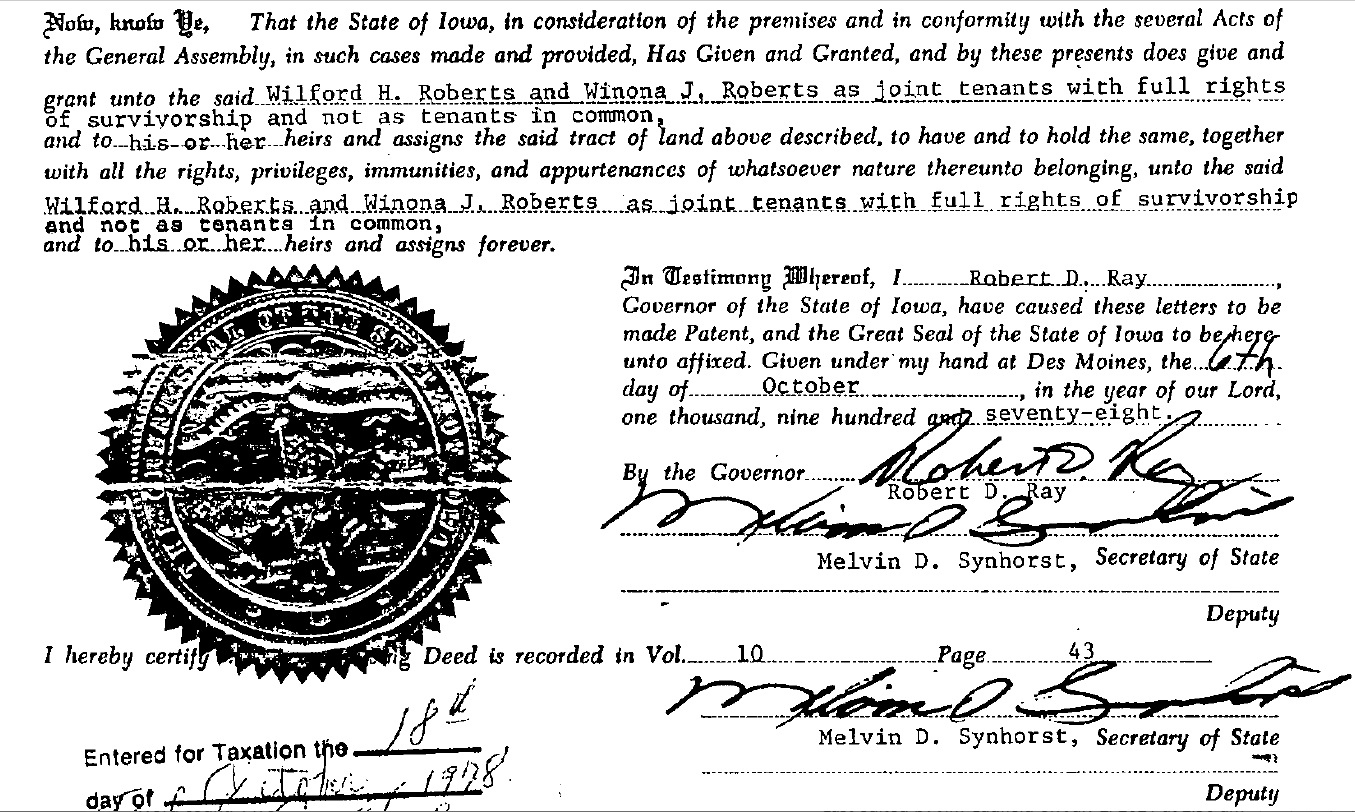 The western portion of the McKee Auto Center property at 400 First Ave. was purchased on contract in 1995 from A. David Ostrem of the Dal-Co Auto Center Ltd., and the company also bought a residential lot previously known as 308 Third St. in 1996 from Archie and Joyce Ore.

The last piece fell into place in September 2020, when the city of Perry sold to the McKee Auto Center a former portion of Third Street right of way south of South Street. McKee Auto Center had the whole of its four lots surveyed in December 2020, just in time for the Perry City Council to approve combining the four parcels into a single parcel at its Dec. 21, 2020, meeting.

Following the survey, the McKee Auto Center began making way for the planned fence by cutting down the shade trees on Gdid’s side of South Street. In February the city granted the RV dealer a variance to build a taller fence than the city code allowed.

Normally, a fence set back two feet from the property line — the minimum setback required by city code — cannot exceed six feet in height, but the Perry Zoning Board of Adjustment (ZBA) unanimously approved a variance for the construction of an eight-foot fence on the two-foot setback line.

Gdid attended the Feb. 23 Zoom meeting of the ZBA. His son, Mohsine Gdid of Omaha — also known as Mo — translated for his father, who is a native of the North African nation of Morocco and who moved to the U.S. in 2008.

During the public hearing on the proposed variance, Mo Gdid told the ZBA that his father was “concerned about the accessibility to his garage if a fence is erected,” according to the minutes of the meeting taken by ZBA Secretary and Perry Community and Economic Development Director Mike Fastenau.

Gdid also noted that his father purchased the house and grounds in 2011 from its previous longtime owners, Perry natives Raymond and Thelma Lane, with the understanding that the property to the south was his and there was a roadway for his vehicles to use. Gdid said his father has maintained the north side of South Street, as far as the mowing and tree trimming, for the 10 years he has owned the property, and the city of Perry always plowed the snow off of South Street eastward from Third Street, which seemed to imply it was a public street and not private property.

Prior to the February ZBA hearing, two of Gdid’s neighbors submitted comments in opposition to granting the fence variance, and two other neighbors submitted comments “expressing their concern,” according to the minutes. The Gdids’ lawyer, Justin Sullivan of Des Moines, also called city hall before the hearing in order to share his client’s “concern to the variance in regard to the access of the owner’s garage if a fence was erected.”

ZBA members Amber Green, Bruce Klein and Larry Meacham agreed that the only matter before for the board for its consideration was the height variance of the fence. The legality of the fence itself and the problem of Gdid’s access to his garage were no matters for the ZBA, they said, according to the minutes. Board member Alice Miskimins joined in the unanimous vote of approval. Member John Taylor was absent.

Gdid mentioned several times during the February hearing that “his family would like the ability to discuss with McKee options that may work to get vehicles in and out of his father’s garage safely,” and “he would like to have some options made available to his father before the fence is erected.”

According to the minutes, Jon McKee said his company was “open to discussion” and “would welcome a conversation with Mr. Gdid’s father.” Those discussions and conversations never happened after the February meeting.

“Nope. Nothing else — verbal communication — happened in between myself and them,” McKee said in a June 29 interview. “Nothing personally, no, and then as far as anything outside of that, I can’t really talk any further on it without authorization from the owners of the dealership.”

Gdid said he was surprised when the fence sprang up last month without notice. The fence posts were sunk June 15, and the chain-link fencing was installed starting June 18, he said.

“One day dad came from work and found that,” Gdid said, pointing to the fence during a June 26 interview. “This happened while we put a pause on filing a suit and were waiting on a potential resolution. Both lawyers were in discussion and then — boom — he did this.”

He said he thinks his father has solid grounds for a legal claim of adverse possession. McKee seemed equally confident of his company’s legal possession of their 3.61-acre property.

“It’s unfortunate for him, but it’s limited space that we acquired legally,” McKee said June 29. “We paid for it. We own it. At the end of the day, it has nothing to do with him and the reason why we did what we did. At the end of the day, we’re here to go ahead and operate as a business and to protect our customers’ interest and their high-value RVs while they get repaired.”

The McKee Auto Center employs 24 people and has about $8.25 million in annual revenues, according to Dun and Bradstreet Corp., a commercial data provider. It is natural that the company and its needs might trump those of Ali Gdid, a Marrakeshi meat cutter who barely speaks English.

“I don’t blame McKee,” Mo Gdid said. “He bought it. He paid for it. It’s legal. But the city was just like” — here he made a gesture of wiping dirt from his hands. “So not only did the city allow them to basically block access to my dad’s garage, but they also allowed them to put a fence higher than normal next to a residential area.”

Gdid estimated it would cost upwards of $20,000 to move or replace his father’s 100-year-old garage, which appears itself to have been built without any strict attention to property lines and the city right of way.

Perry woman allegedly urges neighbor to ‘blow her brains out’