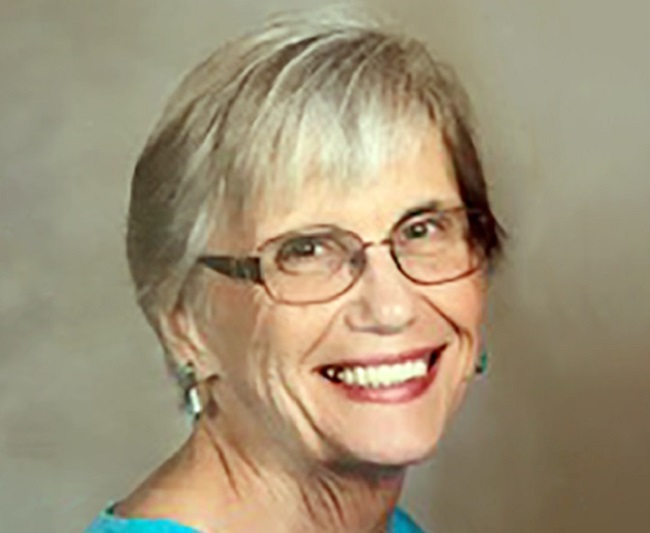 God created the most beautiful life of Sarah Elizabeth Powell through the love of Clarence George and Elizabeth Barstow Powell in the year of our Lord 1945. She was born Dec. 27 in Fairmont, Minnesota.

After traveling with her father’s work, the family settled in Perry, where Sarah attended school until graduating from Perry High School in 1964.

Sarah and Dennis married on Aug. 20, 1966 at Saint Patrick’s Catholic Church in Perry. They were blessed with six children: Mary, Michele, Dennis, Thomas, James and Peter.

Sarah worked in data entry at Farmers Insurance and Ruan Transportation and in family business enterprises before providing day care so that she could stay home to raise her own children. Sarah then began working with marriage ministries, first at Saint Augustin Church in Des Moines and then, with her husband, for the Diocese of Des Moines until they retired together.

Following their retirement, Sarah and Dennis traveled in their RV to see the country and spend time with their children and, most importantly, their grandchildren.

In the year of our Lord 2021, God called the beautiful life that he created 76 years earlier home on Nov. 13 as she was surrounded by her family.

A Mass of Christian Burial will be offered at Ss. John and Paul Catholic Church in Altoona on Saturday, Nov. 20 at 10:30 a.m. The funeral Mass will be preceded by a time of visitation with the family and a sharing of memories beginning at 9 a.m. at the church. Sarah’s cremated remains will be interred in Saint Ann’s Cemetery in Vail, Iowa.

For those unable to attend, the funeral mass will be livestreamed. A link will appear at 10:20 a.m. (just prior to the service) on Sarah’s obituary page at www.IlesCares.com, where you may also leave online condolences.

Sarah was preceded in death by her parents; her sister, Loree; her baby son, Michael; and grandchild, Bobby Chandler.

In lieu of flowers, memorial contributions may be directed to MercyOne Johnston Hospice.