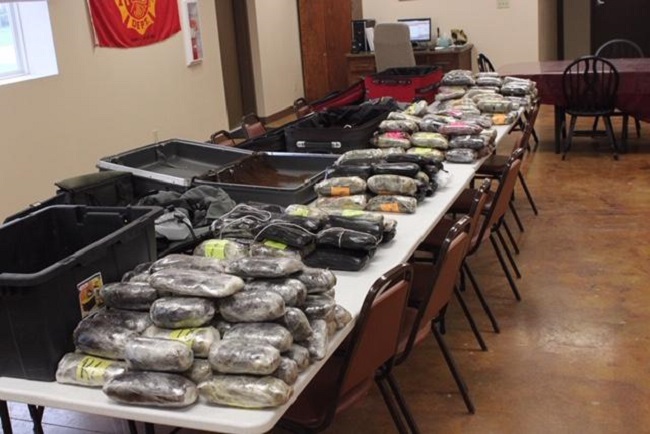 OMAHA, Nebraska — The Tri-County Drug Enforcement Task Force based in Waterloo, the Iowa Division of Narcotics Enforcement and the U.S. Federal Bureau of Investigation (FBI) recently seized more than 80 pounds of methamphetamine and other narcotics in an ongoing drug-distribution investigation, the Omaha office of the FBI announced Wednesday.

Seven search warrants were served Oct. 30 at locations in and around Jefferson, Waterloo and Van Horne, Iowa. The evidence seized included 82 pounds of methamphetamine, 10 pounds of marijuana, 1.5 pounds of heroin, $28,000 in cash and two guns.

No arrests in the investigation have been made as yet, the FBI said.

Methamphetamine is a man-made drug originating from amphetamine in Japan in 1919. Originally used by soldiers in World War II to increase productivity and alertness, it gained popularity in the U.S. in the 1950s as a prescribed diet aid and a way to fight depression.

The creation of the Controlled Substance Act in 1971 made methamphetamine use illegal in most cases, driving production and distribution underground. Beginning in the 1980s, West Coast motorcycle gangs refined production of methamphetamine, creating a product derived from ephedrine that was twice as potent as original methamphetamine.

Meth cooks across the country began using cold medication pills to make their own one-pot labs, producing two ounces or less of methamphetamine. At the same time, super-labs, capable of producing 20 pounds of meth at a time, emerged in California as meth makers ordered large quantities of powdered ephedrine from overseas chemical companies.

Methamphetamine use came to a head in 2005, with in the Midwest topping out at $12,000 per pound. That same year, Congress passed the 2005 Combat Methamphetamine Epidemic Act. The new legislation regulated over-the-counter sales of methamphetamine precursor chemicals such as ephedrine, pseudoephedrine and phenylpropanolamine products.

Over-the-counter medications such as Sudafed were secured behind locked pharmacy counters, with identification requirements and limits set on daily and 30-day purchases. U.S. methamphetamine producers were ultimately forced out of business, and Mexican cartels took advantage of the vacuum that was created.

Methamphetamine seizures along the southwestern U.S. border increased 255% from 2012 to 2017, with the bulk of methamphetamine entering the U.S. Midwest by way of Arizona. In the first six months of 2019, DEA Omaha Division agents collectively seized more than 1,400 pounds of meth with an estimated street value of about $9 million. In all of 2005, agents seized 311 pounds in the same section of the country.