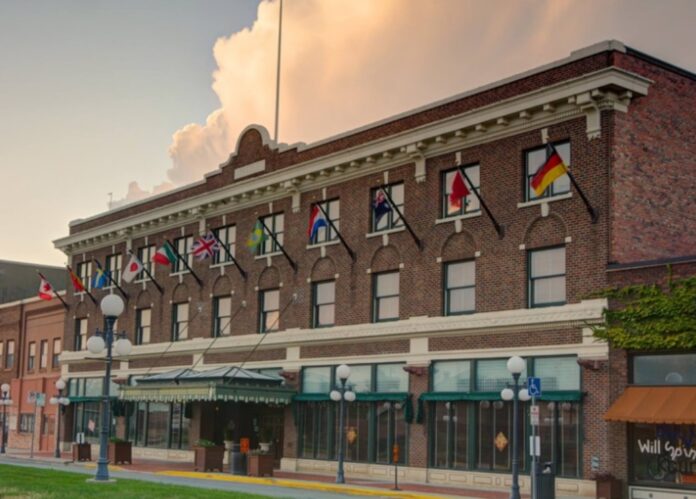 The Hotel Pattee has closed indefinitely.

That’s what the April 1 headline in ThePerryNews.com will read if the city doesn’t buy the hotel, and it won’t be an April Fool’s joke.

Fortunately, it looks like the city will buy the hotel. This seems like a wise move by our local leaders on both the public and private sides. They recognize that stable ownership and steady and sustained maintenance of the downtown’s crown jewel is crucial to Perry’s overall prosperity.

Assuming ownership of the Hotel Pattee and La Poste is the responsible thing to do.

Not everyone favors the idea of public involvement, of course, at least if the comments made on the story in ThePerryNews.com are any indication.

One Perry resident asked, “Does city government have any business running a hotel?” Another asserted that the “city should only be involved in public services.” A third resident disliked “the city getting involved in the for-profit market,” and a fourth did not “believe the city of Perry should invest tax dollars and revenue in a business of any kind.”

In the first place, it is worth observing that the city of Perry operates a campground, just as counties, states and the federal government do, and no one complains that this is an unjustified intrusion into the free market by a public entity. If there’s a difference, I don’t see it.

Another Perry resident registered her concern about the city’s current plans by pointing out that the hotel “has failed to profit since it was refurbished,” and she asked, “What are they going to do differently to make it profitable?”

This claim is not quite accurate, according to people familiar with the hotel’s books. They say the hotel has had a positive cash flow in several years and under several owners. It looks like some of this positive cash flow came at the cost of deferred maintenance, however, so the resident’s concern is a valid one.

Yet is profitability the appropriate standard to apply in this case? Public goods and services do not have to be profit centers in order to be worth paying for. Their value is in their goodness and not in their profitability. We do not insist that public schools turn a profit, for instance, because we know that the value they deliver to our society is worth the cost of operating them.

The same argument can be made about the McCreary Community Building, which has always operated in the red since it opened in 1983. In spite of this, the city leaders invested $1.7 million last year in remodeling and refurbishing the MCB because they understand that the rec center’s value as a public asset — sometimes termed its social value — makes it worth supporting even at a loss.

The benefit makes the cost acceptable.

Not everyone accepts or agrees with this argument. Extremely tax-averse residents are often found among the CAVE people, that is, Citizens Against Virtually Everything. Some Perry residents have opposed all public support for the hotel ever since it was first proposed in 2008, after the Ahmansons pulled out and the business went dark for 18 months, when Perry was deep in the depths of the depression following the global collapse of the investment banks.

When a buyer for the hotel was eventually found and the city council came to consider whether to give them $500,000 over five years as an inducement to operate, some residents spoke out forcefully against the financing arrangements, and they presented the following petition to the Perry City Council:

“As a citizen of Perry, it is my wish that the city of Perry NOT assist any person or entity with the purchase, opening or improvements on the property locally known as the Pattee Hotel. This includes no loans, no grants, no tax increment financing nor any other financial aid.”

Thirteen Perry residents signed the petition, which was apparently rejected by the council because the “petition was not in proper form as there was no date on the petition and it was not addressed to the entire council,” according to city council minutes from April 7, 2008.

At the same meeting, Perry’s far-sighted and long-serving resident Wilbur Dickerson “questioned if it would close in five years and again the owners would leave town.” Events later bore out Dickerson’s prediction, and the hotel closed rather unceremoniously in July 2013, doing no favors for its brand.

Nevertheless, the city made similar grants to the hotel’s two subsequent owners, showing their continued commitment to the commercial centerpiece, and now they are poised, in partnership with Perry Economic Development Inc. (PEDI), to take direct control.

Of course, there is risk, but cities operate successful ventures elsewhere, so it can be done here. Take the King’s Pointe Waterpark Resort in Storm Lake, for instance, which includes a hotel, cottages, restaurants, golfing, a marina and so forth. It is all owned by the city.

The Perry-PEDI committee has studied the Storm Lake resort and other towns’ enterprises to see what makes them tick and how best to operate a hotel and event space. Their  studies started in July 2017, when the Hartz family decided to move on, and they suspended them when Tom Maxwell bought the hotel. Now the studies are complete, and they conclude that the benefit of the deal will likely outweigh the cost.

Skeptics should recall that when the hotel was hitting on all cylinders under the ownership of the Hartzes, they were serving “huge groups booking weddings, businessmen from all over the world and bikers from all over the country,” according to a former employee. There is no reason such days cannot return.

Indeed, it might well be that when the High Trestle Trail connector opens in 2022 or 2023, giving Perry a double trail head on the two most popular recreational trails in central Iowa, the hotel’s 40 rooms will be filled every night with bicyclists. All such visitors will help maintain the head of steam built up among the downtown retailers in recent years.

Perry’s residential areas are also growing. The town saw some 25 new homes built in 2019, a spurt in housing starts unseen in Perry for many years. Everything slowed in 2020, the pandemic year, but Dallas County Habitat for Humanity and the PHS-DMACC building trades class still managed to raise a few more roofs, and the first 12 of 34 new homes are now going up in Magnolia Park, and the 30-unit Perrywood apartment house will soon be for rent.

Several Perry residents seemed to hit the nail on the head in summing up the city’s position relative to the Hotel Pattee and La Poste: “Seems like we are paying for it anyway,” one said. “If we owned it, at least we’d see a return on investment instead of outside investors making money by flipping the hotel.”

Another said, “We have already invested over the past several years, so it makes perfect sense to purchase this beautiful building and keep any monies from the investment in our community.”

I share their opinion and encourage our city leaders to take on this new burden, which Perry pride and prosperity can easily bear.