Former Iowa Gov. Robert D. Ray was laid to rest Friday in sorrow but also in thankfulness for the goodness he brought to the state’s highest office.

Ray’s goodness was the kind that prompted goodness in others. He made it easy to answer goodness with goodness. He could bring out the best in Iowans. Perry met Ray’s goodness with its own when it came to accepting refugees from southeast Asia in the mid- and late-1970s.

The first story I wrote for the Perry Daily Chief during an internship in the summer of 1979 was a June 4 piece about the Lam family, recent immigrants to Perry under the sponsorship of St. Martin’s Episcopal Church. They were among the “boat people.”

One-year-old Lam Knoc Minn slept during the interview of his parents, Lam Tu Cuong and Vuong Tuyet Mai, and his grandfather, Lam Luong. Lam Knoc Minn would turn 40 years old this year. I wonder whatever became of him.

Robert D. Ray was still Iowa’s governor in 1982 when I moved to Los Angeles and found myself living under another governor, Jerry Brown, one who has more recently returned, Branstad-like, for further service in office.

Brown at that time was aerially dousing the orchards — and the populations between the orchards — with malathion, trying to stop an infestation of Mediterranean fruit flies and save California’s agricultural economy.

I got a job managing a thrift shop in Garden Grove, Calif., a section of Orange County where many Vietnamese immigrants lived. Their commercial district was called Little Saigon, and you could get wonderful Vietnamese sub sandwiches and strong, French-pressed coffee for pennies.

Lam Knoc Minn might be living in Garden Grove today, for all I know. If he is living at all, it  might be mostly thanks to the charitable heart of Robert Ray. It is almost impossible to imagine, with our current attitude toward immigrants and immigration, that Ray could pull off the same program of salvation today.

He was truly a compassionate conservative. He embodied that virtue before the phrase became a slogan for something more like its opposite. I hope Iowa can someday produce public servants of his caliber again. 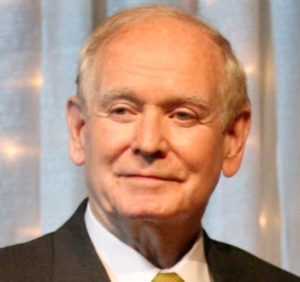 Robert D. Ray was born in Des Moines Sept. 26, 1928, and passed away in Des Moines July 8, 2018. In the intervening years, Bob Ray’s leadership touched the lives of Iowans on dozens of fronts and reached global impact on several occasions.

Ray grew up in the Drake neighborhood and met the love of his life and future wife, Billie Lee Hornberger, at what is now First Christian Church while they were students at Roosevelt High School. The Roosevelt High School sweethearts started dating in 1945 and were married Dec. 22, 1951.

His life revolved around love of family, first as a son and brother, followed by his passion to be a devoted husband, dedicated father to the Ray’s three daughters and adoring grandfather to their eight grandchildren.

After World War II, Ray served the U.S. Army in Japan. He graduated from Drake University with a business degree in 1952 and law degree in 1954. He was a law and reading clerk in the Iowa State Senate, where he began to understand government and relish politics. Later he built a successful practice as a trial lawyer.

In 1963 Ray was elected Iowa Republican State Chairman. After heavy losses in 1964, the Ray-led GOP elected three new Congressmen and 88 state legislators in 1966.

After winning a hard-fought primary and surviving an airplane crash, Ray was elected Iowa’s 38th governor in 1968. He was re-elected in 1970, 1972, 1974 and 1978. Because Iowans appreciated his steady, open, bipartisan leadership, Ray became the state’s first four-term, then five-term governor.

During his tenure, Iowa expanded funding for K-12 education, created a merged DOT and eliminated the sales tax on food and drugs. In the late ’70s, Ray led the way for bottle and can deposit legislation, dramatically cleaning up Iowa’s roadsides.

In the late 1970s, Gov. Ray became a worldwide leader in the humanitarian re-settlement of refugees from Laos, Cambodia, Thailand and Vietnam by helping them relocate, find jobs and start new lives in Iowa.

In 1979 Ray was a member of the U.S. delegation to the Special United Nations Conference of Refugees in Geneva, Switzerland. He later served as a U.S. Representative to the United Nations in 1983.

Gov. Ray was a member of the Iowa Business Council and served on the boards of directors of the Maytag Corporation, AEGON USA, Norwest Bank (now known as Wells Fargo) and Alliant Energy. As a private citizen, Ray became involved in national health care debates while serving on many commissions.

In the late ’90s, Ray filled out a term as Mayor of Des Moines. Ray also chaired the Drake University Board of Trustees and when a vacancy occurred, he was named president of Drake.

At the request of Gov. Terry E. Branstad, Ray chaired Iowa’s Sesquicentennial Commission, a colorful 150th anniversary celebration of Iowa becoming a state in 1846. That work led to a Ray-inspired vision of enhanced civility through character and leadership resulting in Iowa’s CHARACTER COUNTS! initiative, which is now located at the Robert D. and Billie Ray Center at Drake.

Ray was a trustee for the Herbert Hoover Presidential Library and Museum and member of the Greater Des Moines Committee. He was a founding board member of the Iowa Natural Heritage Foundation and founding co-chairman of Keep Iowa Beautiful. Ray was a strong supporter of Easter Seals of Iowa and Camp Sunnyside, including decades as a faithful participant in the annual Pony Express Ride.

In 2005 Ray became the only governor or former governor to receive Iowa’s highest honor, the Iowa Award, presented by Gov. Tom Vilsack and the Iowa Centennial Memorial Commission.

Ray was the first recipient of the Des Moines Register’s Iowa Star Award after having been named by the paper in 2000 as the Most Influential Iowan of the 20th Century. He was inducted into the Iowa Insurance Hall of Fame, the Business Hall of Achievement and the Iowa Business Hall of Fame.

Ray’s first elected office was president of the seventh grade class at Callanan Middle School, a campaign managed by his life-long friend, Marvin Pomerantz. While at Drake, Ray was elected student president and was a member and president of the Sigma Alpha Epsilon fraternity, which he long credited with cultivating his manners, character and civility.

Ray was a talented school-boy athlete with a passion for sports his entire life. Ray’s Drake Bulldogs were his favorite team though he cheered for all the schools in the state to be successful. Ray was an enthusiastic Iowa Hawkeye football and basketball fan as a result of being a color commentator for Iowa Hawkeye football games in the 1950s and 1960s with his radio business partner, Frosty Mitchell.

Ray developed a passion for the Drake Relays while running as an elementary student and only missed four Relays since that time. He later became an ardent tennis and ping-pong enthusiast. Ray also loved cars and was a frequent spectator at the Indy 500.

Ray was an accomplished photographer who loved taking pictures of people and sending them copies afterwards. Photographing his children and grandchildren gave him the greatest joy. And while Ray dined with presidents and dignitaries from across the globe, some of his favorite meals were with his family at McDonald’s. The Rays were world travelers, with their favorite trips being with family in Colorado, on African safaris, London, the Eden Project in the U.K., Disney World and a Disney Cruise.

Ray had a significant sweet tooth for ice cream and his special chocolate chip cookies. He also had an ice cream developed in his name by Anderson Erickson Dairy that was sold locally to benefit charitable causes.

Ray was preceded in death by his parents, Clark and Mildred Ray; and his sister, Novelene Gibbons.

“The happiest people I know are people who are doing things for other people.”
– Governor Robert D. Ray 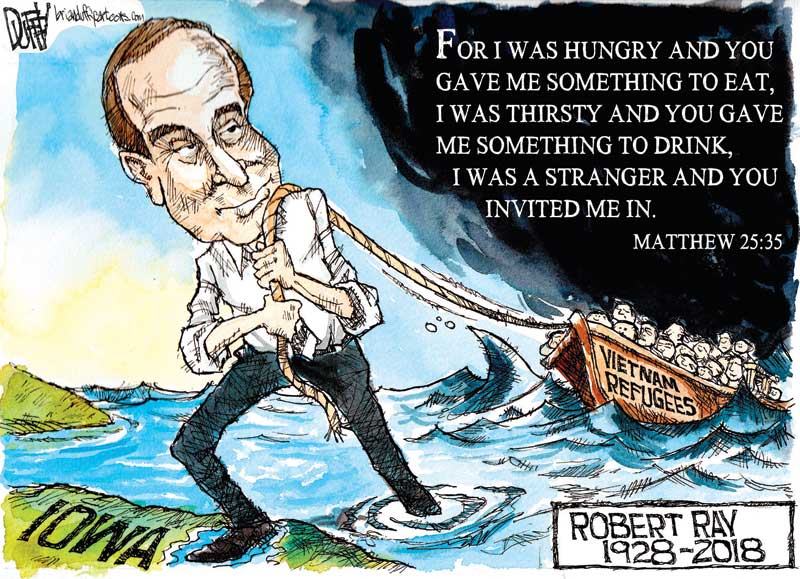